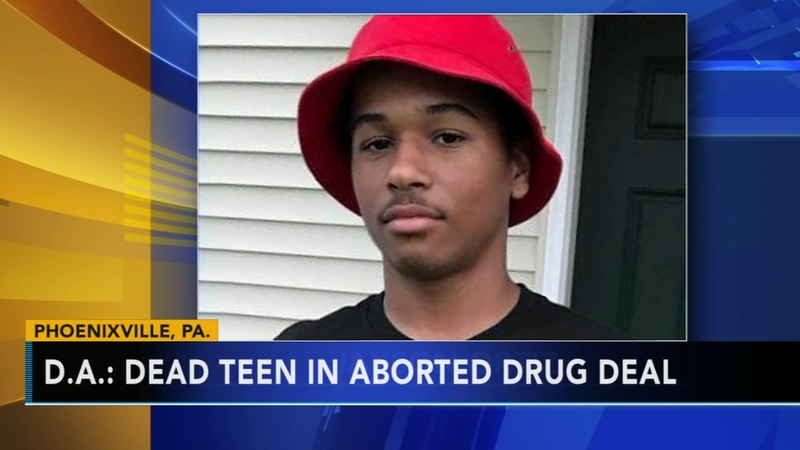 PHOENIXVILLE, Pa. -- Police are searching for a group of males and a vehicle wanted in connection with the shooting death of a teenager outside a Dunkin' Donuts shop in Phoenixville, Chester County.

Cameron was a freshman at Phoenixville Area High School.

"This morning we received word from the mother of 9th grade student, Jayson Ortiz-Cameron, that he was involved in last night's incident. It is with heavy hearts that we share she confirmed his passing. As we attempt to come to grips with the loss of this young life, we extend our deepest sympathies to the family and friends of this young man," a post on the school district's Facebook page read.

Ortiz-Cameron's death has been ruled a drug-related homicide.

According to police, the victim and other people planned to commit a robbery in the middle of a marijuana deal in the Dunkin' Donuts parking lot. During the drug transaction, police say the victim was shot and killed.

Police say around 7:15 p.m., a car with three to four people inside, including the shooter, arrived at the Dunkin' Donuts and circled the store, before backing into a spot at the back of the parking lot.

Police say Ortiz-Cameron and his friends had been in contact with the occupants of the car to set up the drug deal.

The victim and his friends approached the car. Police say they had a conversation with those in the car which escalated into a confrontation.

Police say one of the males in the car pulled a silver handgun and shot the victim. Those in the car fled the scene.

Police and medics arrived to the parking lot where they pronounced the victim dead.

Authorities are searching for the vehicle and the males who were in the car. Anyone with information should contact Chester County Detective Joe Walton at 610-344-6866 or Phoenixville Detective Pat Mark at 610-933-1180.

Watch video from the Action Cam outside a Dunkin Donuts store in Phoenixville, Pa. where a 14 year old was shot on December 27, 2017.

Though the school district is closed for the holidays, the superintendent said it was important to open the doors in the wake of Wednesday night's violent event.

"We have opened them up so students can come in for counseling and coming together. It's grief counseling that is taking place, working with the students to help them understand to their capabilities of the tragedy that took place," Superintendent Alan Fegley said.