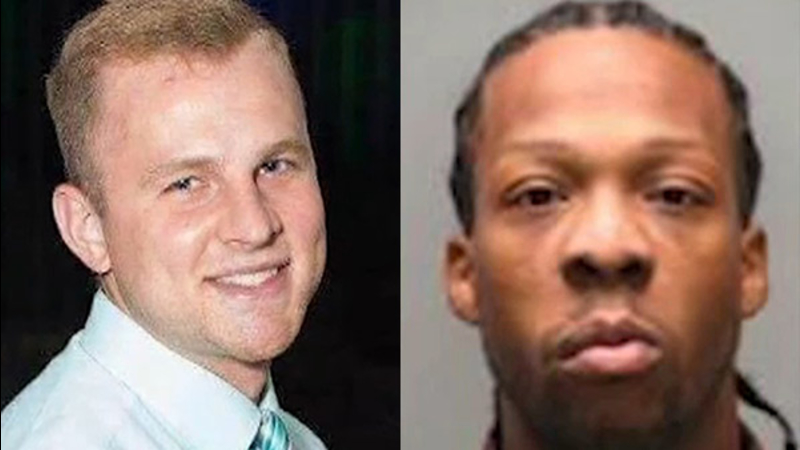 NEW KENSINGTON, Pa. -- Police have identified the suspect in the shooting death of a Pennsylvania police officer.

Authorities are searching for 29-year-old Rahmael Sal Holt. A warrant has been issued for his arrest.

Authorities say they know why Holt was pulled over, but have not revealed why. A $40,000 reward is being offered for information leading to his arrest.

Update New Kensington Police Officer Shooting: Rahmael Sal HOLT (DOB 05/31/88) has been identified as the person who shot and killed Officer Shaw. A warrant has been issued for Holt's arrest. Consider Holt armed and dangerous! Call 911 with info on his location. Pictured below pic.twitter.com/6L6vqQ0WVs

Shaw had served as a part-time officer in three other towns before joining the New Kensington police force full time in June. He was taken to a hospital after the shooting but was pronounced dead there a short time later, according to authorities.

Nicole Drum, whose family lives directly across from the shooting scene, told The Pittsburgh Tribune-Review that she was on a couch in her living room when she heard six or seven shots, including one that hit her house. She looked outside and saw Shaw fall. She was the first person to reach him.
"I was trying to talk to him," she said Saturday. "He wasn't responding."

Brad Larocca, who lives next door to the Drums, also heard the shots, which he said came rapidly. He said Shaw tried to sit up before collapsing.

"I don't know if he was trying to talk," said Laroccoa, who also tried to help the officer. "He was gasping for air."

"Whichever one was shooting knew how to use a gun. It was quick," Laroccoa said.

Drum said her home was hit twice - once under the front porch, and again on the second floor - but neither shot went inside the house. Her father, Wayne Drum, who was not home when the shooting occurred, said police recovered the bullet that hit the porch on Saturday morning. He was told it was a .40 caliber slug.
The Drum home has a surveillance camera mounted under the second-story eave. Wayne Drum said it had captured everything, but the video was fuzzy since it was taken at night. He said police took his hard drive, telling him they would be able to enhance it.