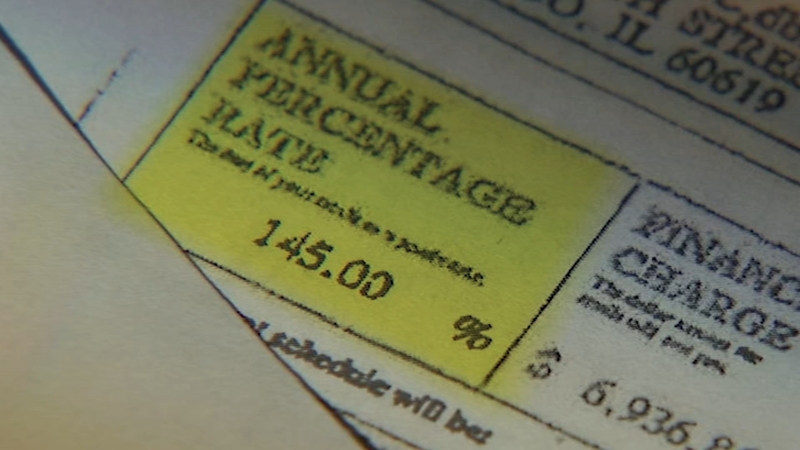 CHICAGO (WLS) -- Would you pay 145 percent interest rate on a personal loan?

Illinois law requires loans to be based on a borrower's ability to pay, but in many cases it can be legal for a business to charge you a sky-high interest rate.

The I-Team found one case where a woman borrowed a total of $8,000 from The Loan Machine, but her attorney said she ended up paying back more than $35,000.

"It's someone life savings that you've just taken from them and no answers," said Pharon Payton.

Payton was in shock when he moved home from California to start caring for his mother and discovered her bank statements. They contained dozens and dozens of automatic debits, paid To the Loan Machine.

It used to be down the road from her home before shutting its doors.

"This company was debiting, automatic debiting, out of my mom's account and, um, it had seemed like it had been for years," said Payton.

Payton, his mother Marguerite, and their attorney say the payments to the loan machine were astronomical

"Well, based on the records available to us she paid back somewhere between $35,000 and $40,000 back to these folks," said Steve Uhrich, Zamparo Law Group.

All of that money was paid back for two loans. The first was a 2011 personal loan for $3,300 dollars which had an annual percentage rate of 145 percent.

"It was 145 percent interest rate and, you know, it doesn't make sense right, my mom is, she was over 65 years old at the time and, you know I mean," Payton said.

Then there was a secondary, line of credit for another $5,000 with an interest rate of 36 percent and a monthly transaction fee.

"At this point, it appears as though Mrs. Payton paid all this money under an agreement that is abhorrent and unconscionable but might very well be legal," said Uhrich.

The Illinois Attorney General's Office said they reached a voluntary agreement with The Loan Machine, to stop collecting on Payton's secondary loan for 36 percent, saying the fees in that loan tripled the interest. They added that the attorney general claims it was an "unlawful loan." However there was no admission of wrongdoing by The Loan Machine.

The first loan at 145 percent interest was legal at the time, but isn't anymore.

"So there are some federal laws that protect folks, like Mrs. Payton. There's the Truth in Lending Act that says you have to get certain disclosures, but those laws really are ineffectual because almost all of these agreements have arbitration clauses where you wave your right to sue.

That arbitration clause was also in Marguerite Payton's agreement

"You know that was my mother's life savings. My mother was going through a terrible time, a foreclosure, she lost her home," Payton said. "It is quite sad human beings or companies would do that to the elderly and senior citizens."

Consumer experts say if you need a personal loan your best bet is to go to bank or credit union.

You should also research what the average going rate is for a personal loan, which should be well under 145 percent.