Adoptions begin for some dogs rescued from 'house of horrors' 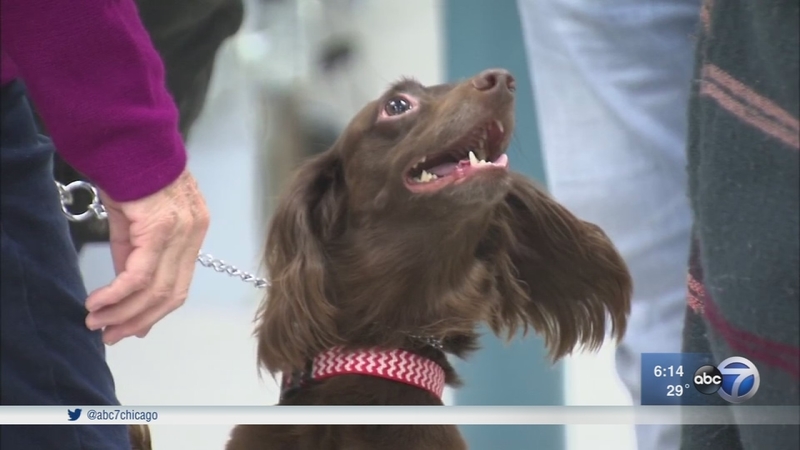 Adoptions begin for some dogs rescued from 'house of horrors'

PEOTONE, Ill. (WLS) -- Adoptions began Friday for some of the 52 dogs rescued from a home in Peotone in what authorities called a hoarding situation. Now, some of those dogs are healthy enough to find a forever home.

The dogs up for this special adoption are known as the Peotone 52. They were discovered in a Peotone hoarder house on October 26.

Forty-seven dogs were rescued from a home in unincorporated Peotone in the south suburbs. An additional five dogs were found last Monday. Many of the dogs were in poor health and needing medical attention.

"They've essentially been living in a puppy mill, they've never been outside, before we rescued never walked on leashes, everything about this world is brand new to them," said Emily Klehm, CEO of South Suburban Humane Society.

All 52 dogs were surrendered to the South Suburban Humane Society. On Friday, seven of them were ready for adoption, but because the dogs came from a horrible situation, the humane society is being very careful about who adopts them.

"We're going to take up to five applications for each dog so that we can look at who has most experience, perhaps with the breed," said Klehm.

When we see what happened we have a good home and it would be nice to adopt one," said prospective dog adopter Natasha Esquivel.

"I would love it, do all I can to show love," said another prospective dog adopter Zola Hamilton.

If an adopter was not lucky enough to take home a dog Friday, they have two more chances. The next wave of Peotone 52 adoptions will be November 17 and December 1.

Thirteen of the dogs were removed from the property on Oct. 26 after paramedics responded to a call about a woman needing medical assistance. The paramedics discovered the deplorable conditions.

The staff then returned Friday to remove another 34 dogs that one of the owners had hidden during the first visit.

The shelter said that some of the dogs suffer from tumors, blindness and starvation - all are in need of immediate medical attention which could cost thousands of dollars. Foster homes have already been found for the dogs, but donations are still needed.
Dorothy Lyman donated some money to help.

"When I think about it makes me feel like crying. I love animals and I hate to see anyone abuse them," said Dorothy Lyman, who lives in the south suburbs and donated money for the dogs' treatment.
EMBED More News Videos

Two dogs rescued from an illegal breeder in unincorporated Peotone in Will County.

Among those rescued dogs are Dachshunds, Chihuahuas, Yorkies and Shih Tzus.

One dog had to be euthanized after it was determined that she was suffering from complete kidney failure and cancer.

The house where the dogs were living has since been deemed uninhabitable by Will County officials.
It was immediately unclear if the owners will be criminally charged.

Klehm said this is a lesson for those who buy from breeders.

The South Suburban Humane Society said Monday that it will begin adopting out some of the dogs that are healthy starting Friday, November 10.

Officials there told ABC 7 that if anyone is interested in those particular dogs, they can come to their facility in person or check on their Facebook page and website for adoption information.