WLS
By Evelyn Holmes
CHICAGO (WLS) -- A dog named Bull was reunited with his family at a firehouse in Chicago's Englewood neighborhood after he disappeared for about a month.

The 2-year-old Danish Mastiff went outdoors in August and never came back. He was found safe Thursday and was checked out by a vet. He's a little thin, but in good shape.

The Chicago Fire Department tweeted Friday that Bull would no longer be living at the firehouse located near West 59th Street and South Ashland Avenue. He was adopted by a firefighter.

Everyone at Engine Company 111 Squad 5 was glad to see him.

Bull ran off just as the house returned from responding to a call.

"We took off trying to catch him, but they more you chase them, the more they run. so he took off," said paramedic Marisol Sindelar.

It wasn't the first time he's taken off. No one was worried at first because usually a resident brought him back or he'd walk back on his own. But paramedic Jacob Buikama said he became concerned after a few days passed and Bull hadn't come back.

"Every day that went by that sinking feeling began that he wouldn't come back and we wouldn't see him again," he said.

The paramedics and the firefighters began looking for Bull when they weren't working.

Bull hadn't been seen for a few weeks until a woman spotted him about a mile-and-half away from the firehouse. She recognized Bull's collar and broken tail as two men used an extension cord as a leash to walk him near 73rd Street and Ashland Avenue.

"She told these guys he belonged to the firehouse, the two guys say they didn't know that so they brought him back and dropped him off yesterday," said firefighter Jack Sarhage.

No questions were asked and the men got a $100 finder's fee. Bull had no signs of abuse.
Related topics:
englewooddogsmissing dogchicago fire department
Copyright © 2020 WLS-TV. All Rights Reserved.
RELATED 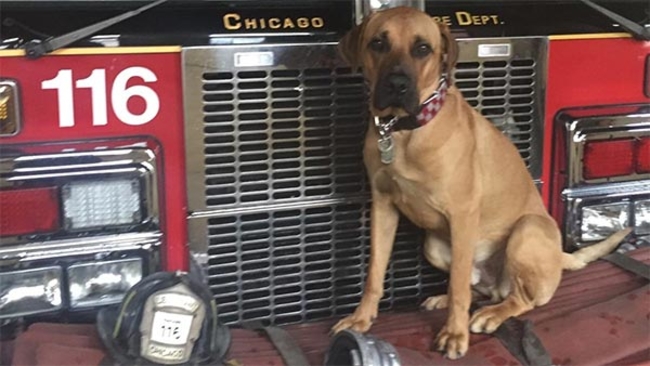