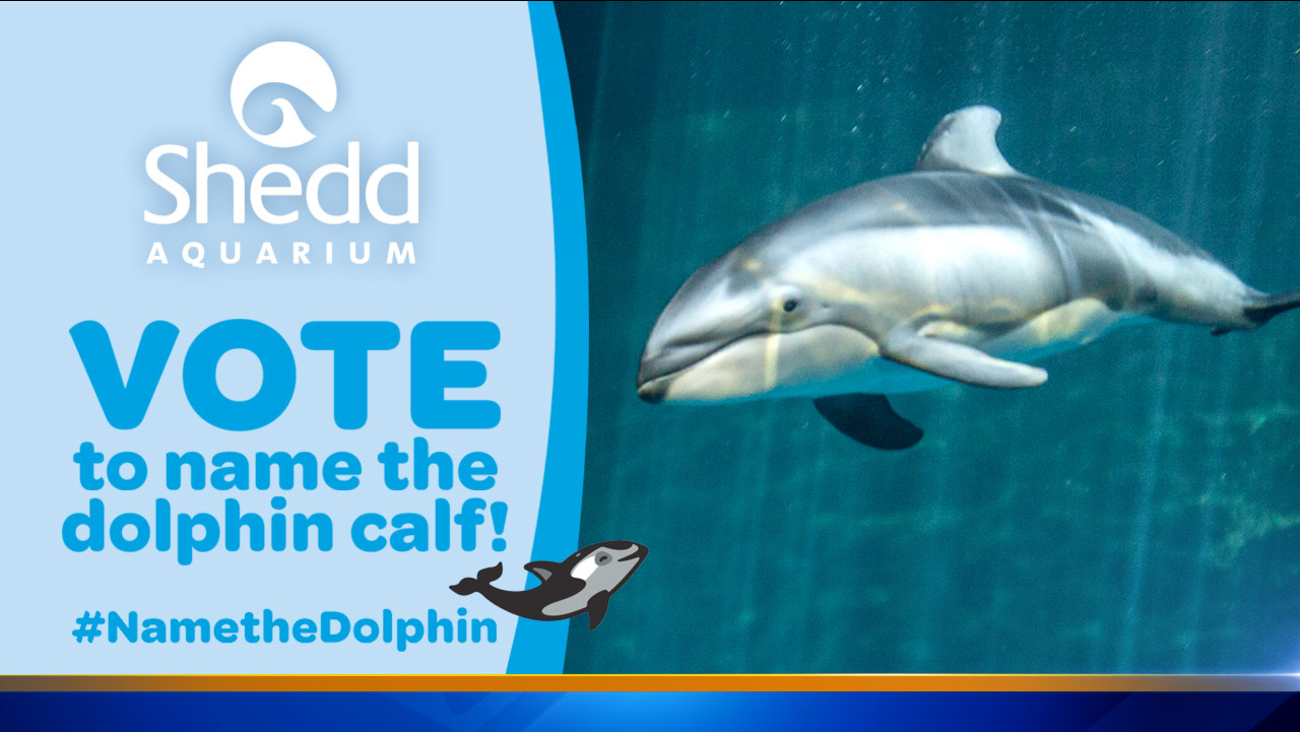 CHICAGO (WLS) -- He is six months old and ready for a name! Chicago's Shedd Aquarium welcomed a Pacific white-sided dolphin into its family in June and now they've launched a contest to name the calf.

There are only 20 pacific white-sided dolphins at aquariums in North America. Six of them live at the Shedd. There are only two days left to vote on the new calf's name.


About the dolphin calf:

* The calf has grown a lot since birth, now weighing 108 pounds and is just shy of 6 feet long.

* In addition to learning his name-shape, the red circle, he is also learning to position himself motionless in front of the trainers, with his mouth open just above the surface of the water, waiting for the trainers to carefully deliver the fish directly into his mouth. Sometimes he will stay to take several pieces of fish in a row, and sometimes he swim away with the fish to go play with it.

* He is getting stronger and more coordinated every day. During sessions and shows, he will often join Piquet and the other adults on acrobatic behaviors like porpoises, tail lobs, and tailwalks. In the early morning hours, you will frequently see him trying out new twists and flips, creating aerial behaviors of his own.

* With fewer than 20 Pacific white-sided dolphins in accredited North American zoological facilities, this birth is significant for better understanding the reproductive biology and behaviors about the rarely studied species. Shedd has four females and two males, including the new calf.

* Pacific white-sided dolphins are extremely difficult to study in the wild because they are a pelagic or open-water species.

* Few people in the Midwest will ever have the opportunity to enjoy direct contact with whales and dolphins in the ocean. Organizations like Shedd Aquarium provide this first-hand experience and inspire visitors to support conserving these magnificent animals and their natural habitats.

* The need to enhance public understanding and appreciation of Pacific white-sided dolphins and the aquatic world has gained urgency as more of the world's waters are polluted, more habitats are lost and more species become endangered.

* Contrary to popular belief many marine mammals are not in danger of extinction. Pacific white-sided dolphin populations are doing very well in the wild. There are an estimated one million Pacific white-sided dolphins found throughout the northern Pacific. Shedd's work with the animals under our care has helped inform decision making for conservation efforts of these small groups that have been impacted.

Fact Sheet on this calf:

Very few pacific white-sided dolphin births have been witnessed in a zoological setting and none have been witnessed in the wild. Consequently, much of the information we have about dolphins and their behaviors are based on observations of other cetaceans. Through our work at the Shedd Aquarium, we continue to add to the constantly growing body of knowledge about this species.

Appearance: At birth, calves will have several distinctive creases around their body. These are fetal folds and will start to disappear after several weeks.

Critical Phases: The first year is the most critical period in a calf's development and there are objective milestones we look for in gauging its progress including:

1. A live birth and its first breath
2. Bonding with mother
3. Successful nursing
4. Increases in size and nursing efficiency
5. Eating some whole fish
6. Weaning and independence from mom

About weaning: This is the time during which the calf switches from its mother's milk to whole fish. Weaning comes in phases and each phase starts at varying times:

Male or Female: It is not currently possible to determine the sex of a calf while it is in the mother's womb. (although Shedd's veterinarians and those at other AZA facilities are working toward this goal and making progress). Even a regular ultrasound does not reveal this information. After birth, it can still take time to accurately determine the sex since the calf will not be handled for any physical exams unless it is absolutely necessary. We may not be able to positively identify the calf's sex for several weeks or months.

The Father: Shedd works cooperatively with other accredited zoos and aquariums to manage the sustainable populations of the animals in our care. Miami Seaquarium's male dolphin, Lii, is the sire.

The Mother: Piquet - pronounced (pee-KEHT) - means "Female of Small Stature" in Tlingit. She is a 27-year-old, 200-pound Pacific white sided dolphin. This is Piquet's second pregnancy. In 2012, she gave birth successfully to Sagu, who turned 3 in May.

Watch the LIVE view of the dolphins at Chicago's Shedd Aquarium below: