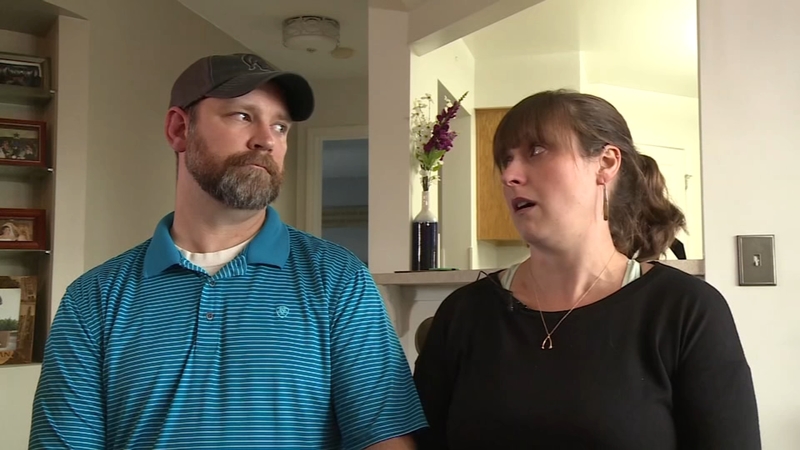 PETOSKEY, Mich. (WLS) -- A Michigan woman claims a pharmacist denied her medicine while she was having a miscarriage.

"No one thought we were going to have children so it was a surprise to everyone," Rachel Peterson told Grand Rapids news station WZZM.

Rachel and husband Rob were excited to find out they were pregnant for the first time. "Unfortunately on June 29, I did not have any of the morning sickness or pregnancy symptoms," Rachel said.

So she rushed to her doctor.

"Unfortunately they did not detect a heartbeat or ultrasound and the fetus was no longer viable," Rachel said.

"The pharmacist called me and said that he couldn't fill the medication in good conscience, because he was a good Catholic male and he couldn't contribute to an abortion," she said.

Cytotec can be combined with another medication to induce an abortion.

"I was definitely angry at first but then I think I had to calm myself down and just be there for her to help her through this so we could pack up and get down here to get it filled because if she would have gone a day or two more there would have been some real trouble," Rob Peterson said.

The couple immediately drove more than three hours back down to Ionia where the prescription was finally filled.

The ACLU sent a letter to Meijer demanding action. The company said it couldn't comment on this specific matter due to privacy laws and reiterated that the store's policy is consistent with the American Pharmacy Association and Michigan Pharmacy Association guidelines. The company also said the pharmacist involved in the incident has not been employed by Meijer since early July.

"Meijer strives to treat its pharmacy customers with dignity and respect," the company said in a statement. "We apologize for any customer experience that does not align with our core values."

"I was grieving and devastated by the loss, our loss and then for someone to say these things to me during this difficult time I was confused and I did not understand how someone could treat another person like this during such a difficult time," Rachel said.
Report a correction or typo
Related topics:
health & fitnessmichiganhealthmedicalpharmacistu.s. & worldwomen's health
Copyright © 2022 WLS-TV. All Rights Reserved.
TOP STORIES
CPD officer shoots, critically injures 13-year-old carjacking suspect
NY high court to determine if Bronx Zoo elephant is a person
911 dispatcher who took Buffalo shooting call put on leave
Markham police investigating how elderly woman ended up in vacant home
CDC advisory panel greenlights booster shots for children ages 5 to 11
WI man eats Big Mac every day for 50 years
Organization works to alleviate 'period poverty' for Chicago teens
Show More
Rihanna and A$AP Rocky welcome their first child
Illinois reports 7,555 new COVID cases, 15 deaths
FTC warns about baby formula scams on the rise amid shortage
6 injured in explosion as crews battle WI construction company fire
ISP combating expressway shootings with new technology, tactics
More TOP STORIES News