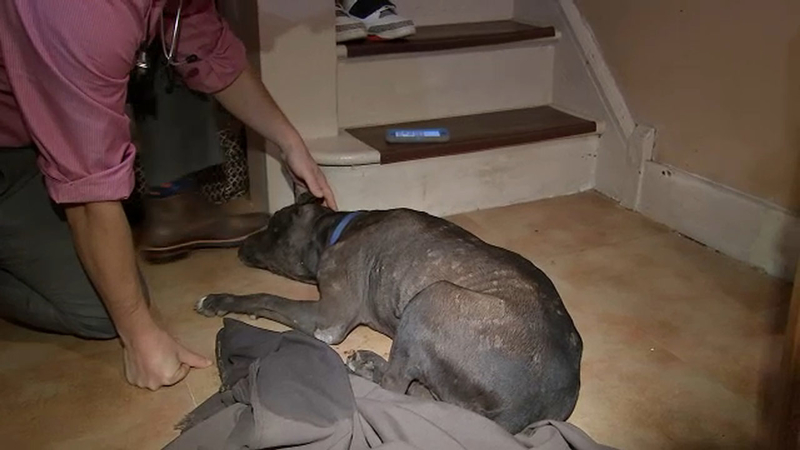 KENSINGTON -- A dog named Magic and his owner survived a house collapse in the Kensington section of Philadelphia and now License and Inspections officials are taking a hard line against the contractor who was performing work on the home.

Officials said the contractor was doing dangerous rehab work in the basement of a rowhome in the 2200 block of Emerald Street. They said the work was not being performed to city codes, endangering lives of the residents next door and their pets.

Chrissy Thomasco, one of four roommates who lives next door, said she will never forget that terrifying night.

"We were woken up at two in the morning on Sept. 26 to evacuate immediately," said Thomasco.

Emergency crews told them their rowhome at 2215 Emerald was in danger due to structural damage caused by a contractor doing work next door at 2213.

"We had to find shelter for our animals, we had to relocate. We were sleeping on couches," she said.

Since that time, the house next door slowly started collapsing, bit by bit, until it completely came down Wednesday.

"And everybody pronounced him dead," said Jose Gonzales, Sr.

But just as a demolition crew was clearing the rubble for the collapsed rowhome, there was a sign of hope.

"I see like something black and I'm like, 'Stop!'" said Pedro Palmer of Palmer Demolition. "I told my guy, 'Hold on, I think the dog is alive. I see something moving.'"

Sure enough, Magic was alive. He was badly injured, but alive.

After being buried in the rubble, a veterinarian said Magic tries to lift himself up, but is too weak and dehydrated, The vet, however, thinks Magic will be OK..

"It was like a blessing and it makes me a believer," said Gonzales.

Meanwhile, Licenses and Inspections said the owner of the collapsed rowhome, 2213 Emerald Street Condominiums LLC. was having work done that was not being performed to code.

Officials said the work was being done by an unlicensed, uninsured contractor, and both his license and insurance were expired.

And then to add insult to injury, somebody broke into Chrissy Thomasco's rowhome that still has a dangerous building sticker on the front door.

"It was kind of bound to happen," she said. "When it has that huge orange sticker on it, it's just like a target, 'Oh! No one lives here?' It's kind of a free for all if you can get in."

It has been 22 days since Thomasco and her three roommates have had to bunk elsewhere until L&I gives the all clear.