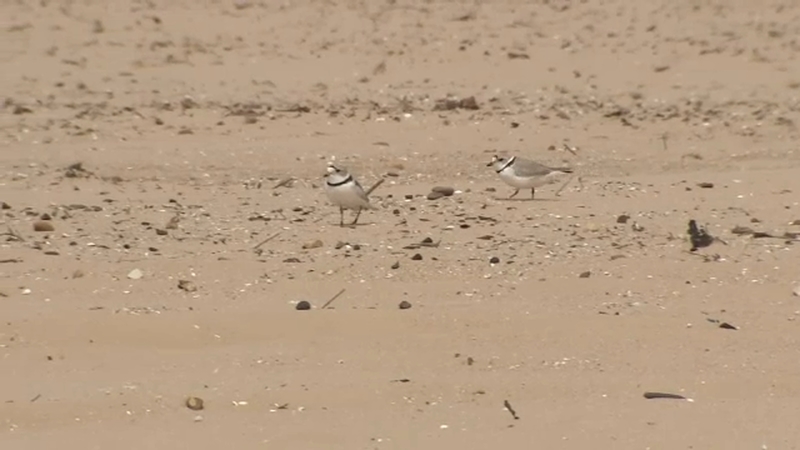 Rare Chicago plovers to be 'grandplovers' as 2020 chick finds mate

CHICAGO (WLS) -- Monty and Rose, Chicago's Great Lakes piping plovers, are going to be "grandplovers," according to an organization that helps monitor the rare birds.

One of the three piping plovers fledged by the couple in 2020 has been sighted in Ohio, near Toledo, bird experts say.

The young piping plover, known as Nish, has apparently taken a liking to one of two Pennsylvania female piping plovers that has also been in the area. The new couple has been courting and mating this spring, and as of May 31, have a nest with one egg.

The good news comes on the heels of a heartbreaking loss after a skunk raided Monty and Rose's nest on Chicago's Montrose Beach this week. The Chicago Park District announced last month that three eggs had appeared in the birds' breeding grounds.

A large area of the beach at Maumee Bay State Park in Ohio has been cordoned off and an enclosure has been placed over the nest, which has been described as very similar to Montrose Beach.

Nish and his new partner's nest is Ohio's first piping plover nest in 83 years, according to experts, who call this a huge win for the Great Lakes Piping Plover Recovery Program.

Nish was given his name to honor the Potowatomi heritage in the Chicago region. The name was selected to highlight the direct relationship and contributions of The Council of the Three Fires (Potawatomi, Ojibwa, and Odawa) to what is now modern-day Chicago, according to the Chicago Piping Plover organization.

The Chicago team has shared all their resources with the Ohio team and looks forward to seeing the success of the nest.

This is Monty and Rose's third summer together at the Chicago beach after arriving within a day of each other. Officials said Monty spent his winter in Texas, while Rose, Nish and the two other 2020 chicks were in Florida.

The Great Lakes piping plover population, which was once below 20 pairs, has rebounded thanks to recovery efforts, officials said. There are now roughly 70 breeding pairs.