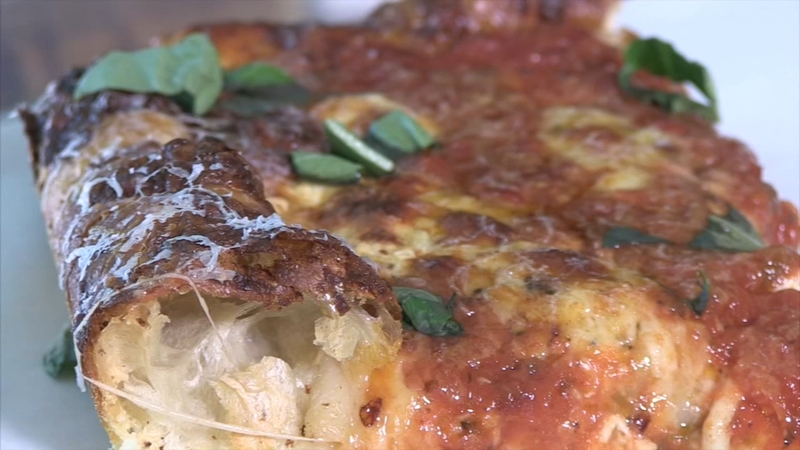 CHICAGO (WLS) -- Chicago is known for its pizza, both deep dish and the thin tavern-style pies. But there's a wave of square pizzas sweeping the city, with thicker, crispier crusts.

Working with local, seasonal produce is nothing new for the staff at Table, Donkey & Stick in Logan Square. But since March, they've shifted from carefully plated dishes to pizza.

The owner grew up in New York, and felt there was an underserved need here for something more Roman or Sicilian.

"It's a style that I liked growing up. Typically, you go to a slice joint to get a regular slice, but there were a few places in my town that did a really good Sicilian slice and I always kind of intrigued to have," said Matthew Sussman, the restaurant's owner.

Formed and baked in large, rectangular pans, they end up with beautiful, golden undercarriages and crispy sides.

On the West Side, the couple behind Five Squared makes Detroit-style pizza - known for its crispy, cheesy square edges and soft, focaccia-like interior - from a kitchen at The Hatchery in East Garfield Park.

"Previously we were a food truck, but ever since mid-March we have converted to a pickup and delivery service directly out of our commercial kitchen," said owner Steve Kaplan.

They offer pickup Fridays only, but will also deliver using third parties. They get creative with flavors like Chicago Italian Beef, Chicago Hot Dog, and even Buffalo Chicken and Cuban Sandwich.

"We've got a lot of fun toppings like our PB & J - which is pepperoni, bacon and jalapeño - which is a favorite. We do spinach and artichoke on our pizza, we obviously do all the standards as well. But every single week we're coming up with new, fun flavors," he said.

In Elmwood Park, Massa Café Italiano now sells frozen Sicilan pizzas in four flavors. Just heat in a 425 oven for about 20 minutes, and you've got a thick, crispy-edged pie with a typical crater-riddled undercarriage.

Another Sicilian is emerging in Bridgeport, where the new Pizza Fried Chicken Ice Cream is about to open - they've been doing pop-ups the past few weeks.

"So we were like, let's beta test this Sicilian pan we've been working on. We used to make it as our family pie that we'd eat every night on our own," said co-owner Cecily Rodriguez.

The pies are majestic - using either fresh vegetables or carefully sourced meats - baked in a deck oven until they emerge crispy-edged and topped with fresh basil, just like they do on the East Coast.

"I don't know why it never took off here. I guess Chicago isn't really a slice city in general. But I think that introducing this to the city will be a nice change of pace for the pizza world."

The restaurant is going to be open any day now. Best thing to do is check their Instagram, @pizzachickenicecream; and when it does open, they will likely be one of the only places to get a slice of Sicilian to go in Chicago.

Steve says most of those pizzas require ordering ahead, online, so be sure to check out the links he provided: