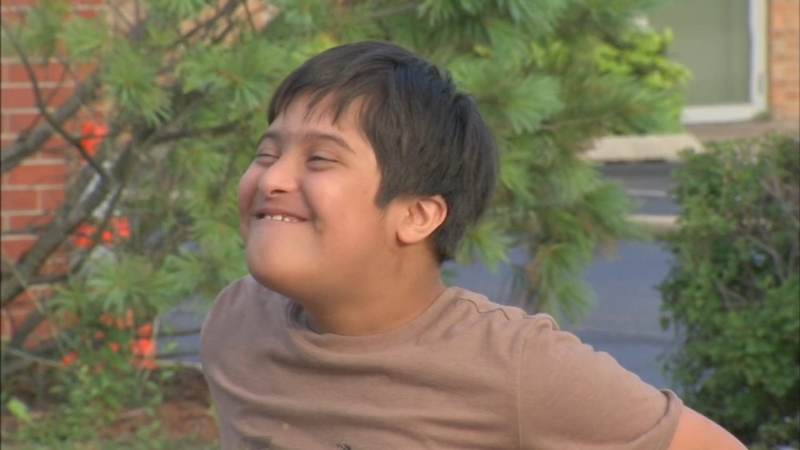 GLENDALE HEIGHTS, Ill. (WLS) -- An 11-year-old boy with Down syndrome was inside a vehicle that was towed while his father delivered a pizza to a mosque in west suburban Glendale Heights Friday afternoon, according to the delivery man.

Jon Ramzan said he went to MSI Masjid in the 1700-block of Bloomingdale Road at about 1 p.m. to deliver pizzas from Papa John's, which he does every week.

"Every Friday I bring pizza," he said.

With nowhere to park before afternoon prayers, Ramzan pulled up alongside a neighboring parking lot curb. He said he left his 11-year-old son Faraz in the vehicle while he went inside.

"My son was sitting back and I give him the phone. I go, 'Stay here and I'll be two minutes,'" he said.
When he came out his car was gone and people outside told him a tow truck driver hooked it up and towed it away.

"I saw that the tow truck, at lightning speed, coming in reverse, basically hooked up this car," said Iqbal Ahmad, witness. "I ran to the driver's side and bang on the window and yell there's a kid in that car."

"He took off from the parking lot. All of a sudden I saw the kid in the back, so I turned to the police officer who was there," said Mohammed Safder, witness. "I told him, 'Looks like there's a kid inside the car. He is towing the car.'"

"I saw the child. He was trying to scream and wave," said Arshad Mohammed.

Panicked in the back of the car, hitched to a moving tow truck, Faraz was helpless. He has Down syndrome and is not verbal. But he did have his dad's phone. He tried to text his mother.

"Because when she called, he knows it's his mom on the phone. He was crying. He could not say anything and the guy was yelling, 'Get out of the car, get out of the car and stand over there!'" Ramzan said.

Police said the driver let Faraz out in a bank parking lot and kept going with his father's car.

A good Samaritan saw the unattended boy and took him back the mosque, where he was reunited with his father. Police said he was not harmed.

"I decided to call my dad to see when he was going to come home from work. When I picked up the phone there was the man who found my brother. He said, 'I have your kid. He is wandering around in the road,'" said Keiran Ramzan, Faraz's sister.
Officers found the tow truck in a parking lot in the area with the car attached, police said.

The driver, identified by police as 52-year-old Brian Clark of Bensenville, was charged with endangerment of a child and reckless conduct. He was released on bond Friday evening.