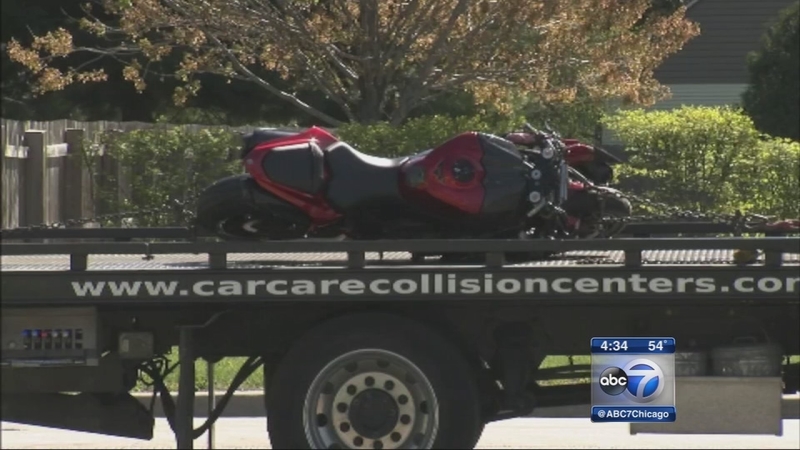 PLAINFIELD, Ill. (WLS) -- Two people were killed when a motorcycle struck a pedestrian just after midnight on Tuesday in southwest suburban Plainfield near the intersection of Route 59 and Lockport Street.

Police said Sean Fitzpatrick, 27, of Plainfield, was driving a 2007 Yamaha north on Route 59 when he lost control and struck a pedestrian, who was pronounced dead at the scene. The motorcycle came to a stop about two blocks from the crash site, which could indicate speed may have played a factor. 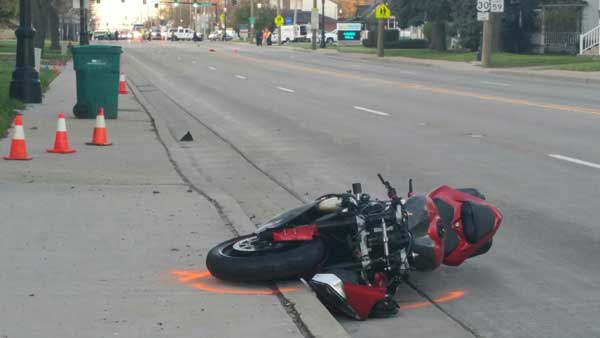 PHOTOS: 2 killed in Plainfield crash
Two people were killed in a crash in southwest suburban Plainfield after police said a man on a motorcycle lost control and struck a pedestrian.
"Just looking at the scene her you can tell that the motorcycle is quite a distance from the actual impact, so it did play a factor," Plainfield Police Sgt. Mike Fisher said.

"Didn't see the motorcycle, but there was a body in front of the house," Bessette said.

Fitzgerald was pronounced dead at 12:39 at Provena Provena St. Joseph Hospital in Joliet, according to the Will County Coroner's Office.

Family members identified the pedestrian as Randy Lambert, 56, of Plainfield. They said he lived in town with his 83-year-old mother and worked at a gift shop. He was walking home when he was killed, they said.

"You always saw him in town. (He) walked everywhere or rode his bike," Beseette said.

Route 59 was closed in both directions from Lockport Street to Main Street (Route 126), while police investigated most of Tuesday.

"In a lot of major accidents like this, you know, especially involving pedestrians, it's not uncommon for articles of clothing like shoes and hats and things like that to fly off of the victims," Sgt. Fisher said. "It's one of those things that it's difficult for the officers to see, as well, as for the general public."

Drivers were asked to avoid the area near the downtown historic district while police worked the scene.

Investigators are looking into calls about loud motorcycles and checking for surveillance video.

Autopsies are scheduled for Tuesday.