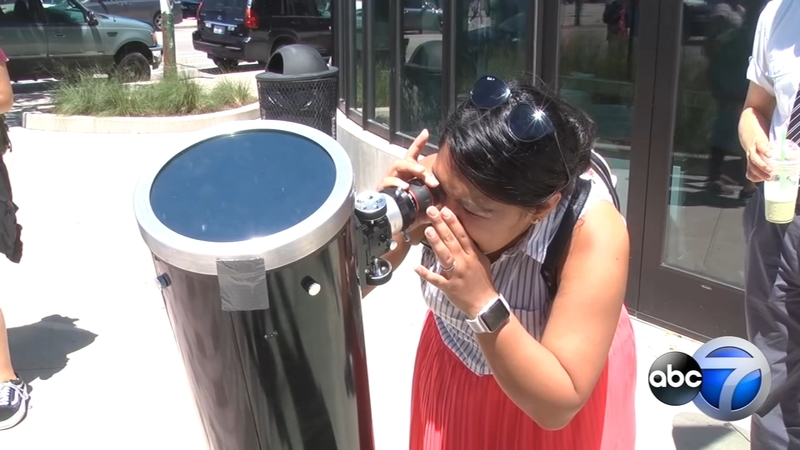 CHICAGO (WLS) -- Looking through telescopes outside the Chicago Public Library's Chinatown branch Wednesday, passersby were treated to a view that's out of this world.

"Oh my gosh," remarked one woman as she looked at the sun, able to see a few solar flares sticking out from its surface.

"You think like a part of it's going to fly off and (get you)," she added.

The Adler Planetarium's 'Scopes in the City program makes this possible, with telescope viewings at libraries and taprooms across the city and in the suburbs too.

"It's an opportunity to expand our reach into neighborhoods and places where other people might not have access to the planetarium all the time," explained Adler Astronomy Educator Adriana Guzman.

"During the day time we'll be looking at the sun but we also have night observing events where we might look at the moon, Jupiter, Saturn, Mars, whatever's up in the sky that we can see from the city," she added.

You can do more than just look up at outer space with the chance to hold moon rocks and planetary fragments, like a chunk of Mars.

There's more Red Planet fun just days away when it moves the closest it's been to Earth in the past 15 years.

Adler will host a special viewing event Monday, July 30, from 9 to 11 p.m. (according to NASA the closest point will be on July 31 though "Mars will appear brightest from July 27 to 30"). There will be plenty of telescopes, naturally, with eyes to the sky.