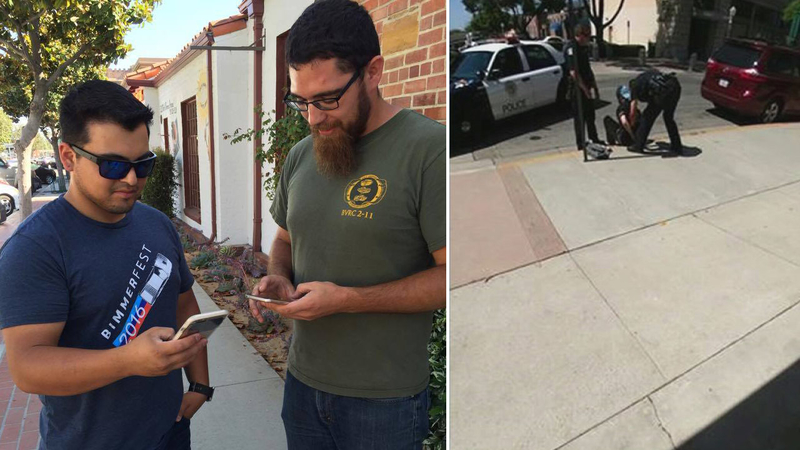 Seth Ortega and Javier Soch, both Marines, were playing the game in a park near Wilshire and Pomona avenues in downtown Fullerton at about 10:30 a.m.

Soch said his game froze and he happened to look up and noticed a man carrying a red plastic rose.

Ortega and Soch said they watched the man approach a woman and her three children.

The woman and her children quickly ran away from the man, according to Ortega and Soch.

The mother called 911 while Ortega and Soch kept a watchful eye on the man.

Ortega and Soch said they watched the man approach another woman and her two children, who were also playing Pokemon Go.

"We see the gentleman go approach them again, at this point, me and my roommate start walking across the street and the gentleman actually walks up and touches one of the children, one of the boys, his toe, and starts walking his way up to the knee," Ortega explained.

"At this point I'm running across the street and a gentleman who was walking down the street does the same thing," Ortega continued.

The children ran to their mother as Ortega and Soch stayed with the man until officers arrived.

Authorities said the man was arrested for child annoyance and it was discovered that he had an outstanding warrant for attempted murder in Sonoma, California.