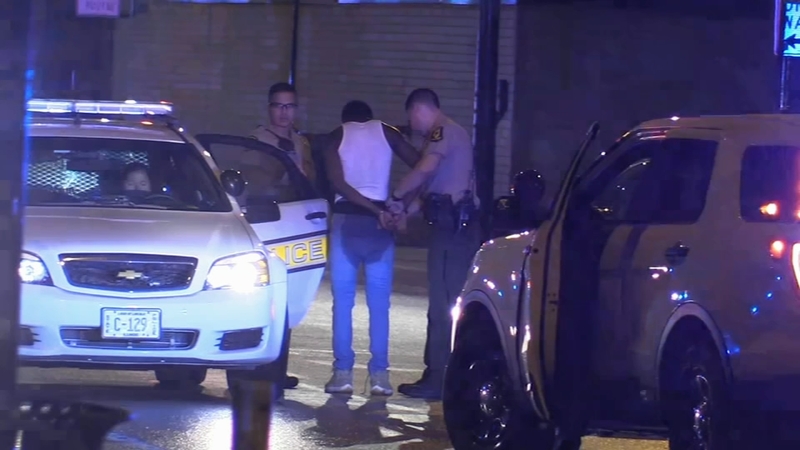 CHICAGO (WLS) -- Five teenagers have been charged and another was fatally shot after an attempted vehicle theft in Lake County, Ill., which led to a high-speed chase into Chicago Tuesday morning, the Lake County Sheriff's Office said.

A 16-year-old male, three 17-year-old males, and an 18-year-old woman, identified as Diamond Davis of Chicago, were charged with first degree murder in connection with the incident. They were charged with murder because a 14-year-old boy died of gunshot wounds sustained during the commission of a forcible felony, the sheriff's office said.

Five teenagers are in custody and another was fatally shot after an attempted vehicle theft in Lake County, Ill., which led to a high-speed chase into Chicago Tuesday morning.

The five appeared in bond court late Tuesday afternoon where a judge set bail at $1 million for each of them. They are due back in court on September 5.

Lake County sheriff's police were sent to a residence in the 17600-block of West Edwards Road at about 1:15 a.m. after a reported vehicle theft. The 75-year-old homeowner told police he shot at individuals trying to steal a vehicle.

The homeowner said two of the suspects approached him and one appeared to be holding something. He fired shots at them fearing for his safety, hitting a 14-year-old boy from Chicago in the head, police said.

Police said a bowie knife was recovered at the scene. The homeowner has a valid FOID card and is cooperating with authorities.

A short time later Gurnee police at the scene of an unrelated crash near Route 132 and Hunt Club Road were approached by a black Lexus SUV. The passengers in the Lexus told police a passenger needed medical assistance.

Police performed first aid on the wounded teen, who was transported to Advocate Condell Medical Center in Libertyville, where he later died, the sheriff's office said. Authorities have not released his identity, pending an autopsy. A 17-year-old boy who got out of the Lexus with the 14-year-old who was shot was taken into custody at the scene.

Four remaining people in the Lexus then fled the scene at high speed. Police pursued the vehicle, with speeds reaching more than 100 miles per hour, and Illinois State Police and Chicago police joined the pursuit. The SUV stopped after running out of gas at the intersection of Randolph and Halsted streets in the West Loop. The chase spanned more than 40 miles.

Police chased down the four other teens on foot and took them into custody at about 2:04 a.m., police said. One of the suspects initially eluded police before being tracked by a police dog to a dumpster about a block away.