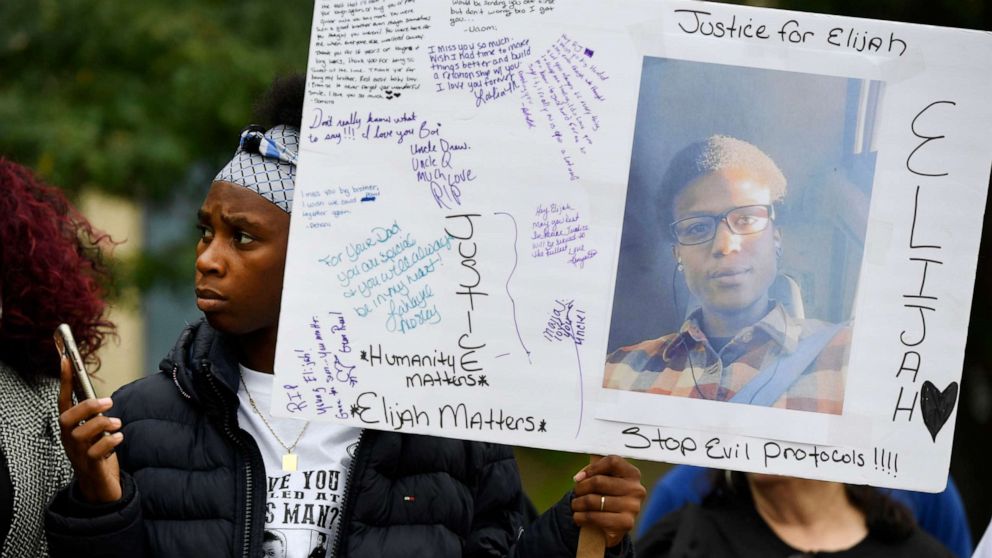 Responding to a scathing report that alleged numerous mistakes by police officers in the death of Elijah McClain, the Aurora, Colorado, police chief said Tuesday she will welcome an independent monitor of her department and apologized to McClain's mother, family and friends.

"The bottom line is Elijah McClain should still be here today," Aurora Police Chief Vanessa Wilson said during a news conference. "Nothing I can say here today or changes that I've made or changes I will continue to make will bring him back and for that, I'm extremely sorry."

An independent review of the death of McClain, the 23-year-old Black man who died in 2019 after being placed in a carotid hold by police and injected with ketamine, was made public on Monday and alleges the officers had no reasonable suspicion to stop and frisk him in the first place.

The report, ordered in July by the Aurora City Council, also concluded that the investigation of McClain's death by the Aurora Police Department's major crimes unit was badly flawed and alleged the detectives "stretched the record to exonerate the officers rather than present a neutral version of the facts."

"Aurora Fire and Rescue appreciates the thorough review of the incident that's detailed in the report," Fire Chief Fernando Gray said at the news conference. "Elijah's loved ones and our local community deserve to see the answers contained in the report and they deserve our actions moving forward."

Gray noted that following McClain's death, the fire department placed a moratorium on the use of ketamine to sedate people. He said changes have also been made to protocols on the use of medication on people who are in restraints, like McClain was, so that miscalculations of weight will be avoided.

Aurora City Manager Jim Twombly said that in the aftermath of McClain's death, the city has worked with Wilson and Gray to take "numerous steps to improve and gain trust in our public safety departments." He said the police department has banned carotid holds like the one officers used on McClain and is overhauling its use-of-force policy.

"I have requested, and the (city) council has provided, funding for a police auditor position that has already completed a body-worn camera audit and is working on a use of canine audit," Twombly said.

He said the city has also contracted with a firm that is conducting an overall review of the police department's policies, directives and practices on "recruitment, hiring, training, responding, disciplining and evaluating."

"I believe the investigative team has identified the issue that is at the root of the case: the failure of a system of accountability," Twombly said.

Wilson noted that other investigations of McClain's death are continuing, including a criminal probe by the state attorney general's office.

"We will address failures that were uncovered, and I will hold myself as well as our officers accountable," Wilson said. "We will evolve, and we will become the police department that the community can trust," said Wilson, who was appointed police chief after the McClain incident.

Wilson said she has made changes in officer training to emphasize de-escalation techniques and recognizing implicit bias. She also said protocols have been changed requiring officers to not solely rely on a 911 caller's description of a subject as acting suspiciously.

She declined to comment on why Woodyard and Roedema have not been disciplined and remain members of the police force, citing the ongoing criminal investigation by the state attorney general.

Wilson fired Rosenblatt last year after failing to report photos of officers mocking a carotid hold at a makeshift memorial for McClain and for responding "haha" when he was texted the images, the chief said. Rosenblatt filed a lawsuit against Wilson and the city asking for an independent review board hearing. His termination was upheld by the Aurora Civil Service Commission earlier this month.
Report a correction or typo
Related topics:
abc newsnational
Copyright © 2021 ABC News Internet Ventures.
More Videos
From CNN Newsource affiliates
TOP STORIES