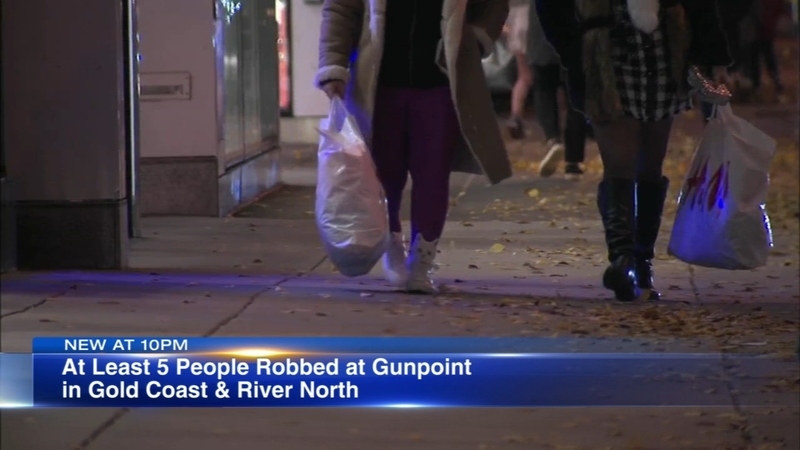 CHICAGO (WLS) -- Police are warning residents following a string of robberies, some of them armed, in the River North and Gold Coast neighborhoods over the past few weeks.

There have been five such robberies since Oct. 27, according to Chicago police, all during early morning hours. In each of these incidents, the victims are approached by one or two men who then rob them by force or by gunpoint.

One robbery happened in the 800 block of North Michigan Avenue, in the shadow of the former Hancock Building, Water Tower Place and several other high end stores.

"A little bit on the alarming side, I suppose, but again, I'm not too shocked to hear that something like that is happening around here," said Doug Delp, who lives near the Mag Mile.

"It's just a reminder that you want to make sure that you keep our eyes open for what's happening around you and stay vigilant, and hopefully it all works out in the end," said Kurt Dykstra, who was walking along Michigan Avenue Friday night.

"I never hesitate to walk by myself up and down the street, but it's alarming," said Diane Quaadman, a Gold Coast resident.

It's unclear whether these robberies are the work of different individuals or perhaps part of a larger crime pattern. But, either way, police remind pedestrians to be aware of their surroundings.