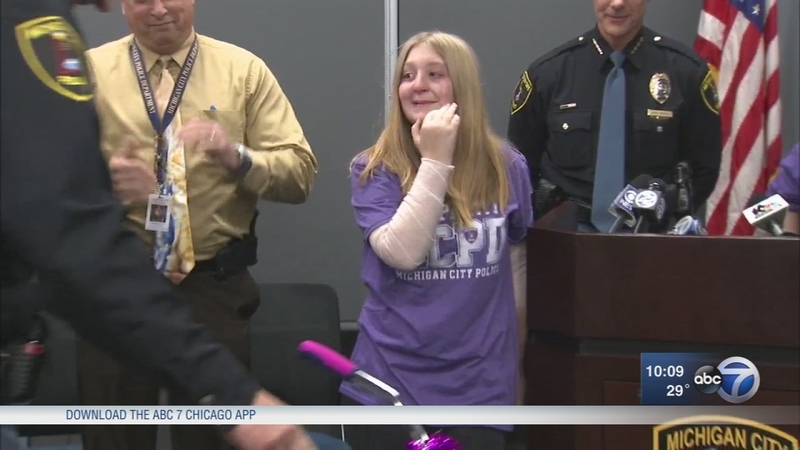 MICHIGAN CITY, Ind. (WLS) -- Winter Morgan, 12, is on her way to recovery after a horrific dog attack. She underwent multiple surgeries after being mauled by a bull mastiff in Michigan City, Ind., in November.

She and the officer who helped save her spoke about the attack Wednesday.

"I want to thank everybody who helped her get away from the dog," Ruth Hall, her mother, said.

Morgan and a friend were walking through backyards on the way to school on Nov. 10 when she was attacked by a 140 lbs. bull mastiff. The friend's mother stepped in, hitting the giant dog with a bike to get Morgan away.

She ran with the girls into the house, but the dog followed after them and continued to attack Morgan. That's when Officer Combs came to the rescue, grabbing the dog. After containing the animal in a room, he attended to Morgan.

"When I first saw it I'll be honest it was a, uh, it was one of the most horrific things I've ever seen. It was not something I was prepared, trained for," Combs said.

Combs grabbed the dog by the neck and head so Morgan could get away.

Morgan suffered bites all over her body in the attack. She was airlifted to a hospital in Indianapolis and spent about a week there. She has had five surgeries so far and her recovery isn't over.

"We don't know how long it's gonna take. They said it could take up to a year to two years," Hall said.

The Michigan City Police Department presented Winter with an early Christmas gift - a bike - and honored Officer Combs with the Lifesaving Award for his brave actions that day.