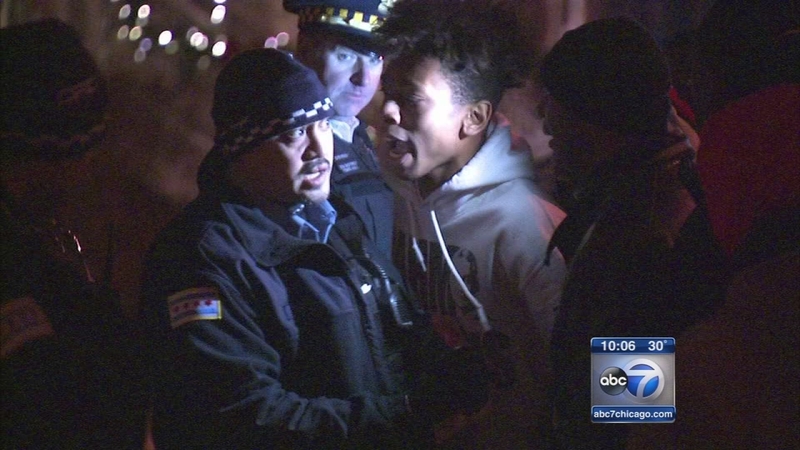 The mayor just returned early from vacation in Cuba to handle the latest deadly police shooting.

A vigil was earlier in the day to remember 19-year-old Quintonio LeGrier. He and neighbor Bettie Jones were shot and killed by police Saturday.

The five-hour protest wrapped up around 9 p.m. The mayor wasn't seen Tuesday night, but lights were on at the home and what appeared to be his security detail was seen passing by.
EMBED More News Videos

Outside Emanuel's Ravenswood home, protesters shouted: "CPD! KKK! How many kids did you kill today?"

Police and protesters came face-to-face - at times, scuffling on the front steps - of the mayor's house.

"He doesn't understand that we're fed up. We're fed up with his leadership in Chicago, and he has to resign," a protester said.

At one point, protesters heckled what appeared to be a staffer entering the home, but the mayor stayed out of sight.

Emanuel was due back from Cuba, where he and his family had been vacationing the last 11 days.

His trip was cut short following the police-involved shooting deaths of LeGrier and Jones.

"Two innocent people are dead because an officer made a decision that was not the right one," said Antonio LeGrier, father.

LeGrier's father appeared on CNN after filing a lawsuit against the city.

It was Antonio LeGrier who called police Saturday morning after his son allegedly became combative and started banging on his door, he says. He also called downstairs neighbor Bettie Jones to let officers in.

But at a vigil in LeGrier's honor, his foster mother says it was she who raised the 19-year-old.

"I've been at him since he was five," said Mary Strenger, LeGrier's foster mother.

LeGrier's biological mother denied initial reports that her son had a mental illness.

Emanuel is planning to speak to reporters on Wednesday. His office issued a statement Tuesday night saying the mayor is focused on finding solutions. The statement did not specifically address the protests here at his home.