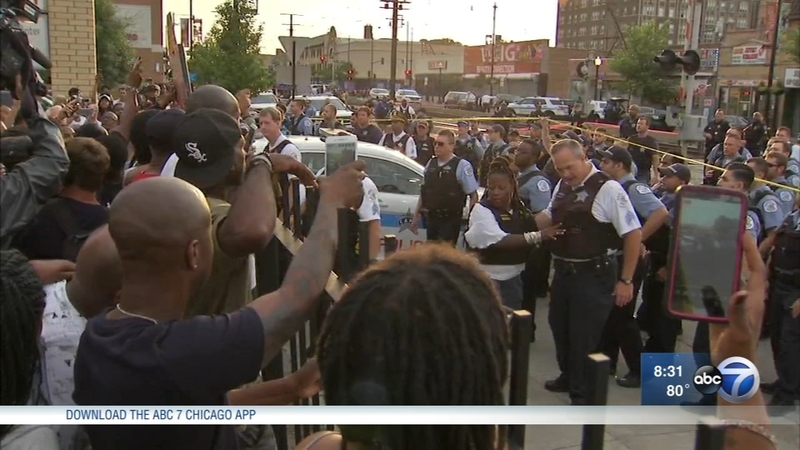 CHICAGO (WLS) -- A man was fatally shot Saturday evening by Chicago police in the South Shore neighborhood, sparking demonstrations that resulted in four officers being injured from thrown rocks and bottles.

At about 6:30 p.m., 3-4 officers on foot saw the man "exhibiting characteristics of an armed person" and went to question him, according to tweet by CPD spokesman Anthony Guglielmi. A confrontation then ensued and the man was shot, he said. A weapon was recovered at the scene, Guglielmi said.

The incident occurred near 71st Street and Clyde on the South Side, where crowds gathered afterwards and, at times, scuffled with police. The crowd chanted, "No justice, no peace." After hours of tension, the group became "combative" and arrests were made after protesters jumped on top of two squad cars and causing damage.

During a Saturday night press conference, Fred Waller, CPD chief of patrol, said the man was swinging his hands and trying to make an escape when it appeared that he reached for his gun. When asked if the man had fired his weapon, he said: "not that I know of."

A man was fatally shot by Chicago police in the South Shore neighborhood, sparking outrage by local residents and witnesses.

Witness Allen Davis said that police saw the man's holster and asked him for his concealed carry permit, but when he reached for it, police shot him.
No officers were hurt, police said.

In a statement, the Civilian Office of Police Accountability (COPA) said it is committed to a "thorough, objective and unbiased investigation and requests the public's patience and cooperation." Anyone with information is asked to contact COPA at 312-746-3609 or chicagocopa.org.

Waller said the shooting occurred in an area where residents had asked for more foot patrol.

A man was shot to death Saturday evening by at least one Chicago police officer in the South Shore neighborhood.

UPDATE - CPD has cleared the crime scene. Several officers were injured from rocks and thrown bottles. 4 demonstrators were arrested. pic.twitter.com/LWnLqstwVs

Inbound and outbound Metra trains were not operating between Stony Island and South Chicago/93rd St. due to the incident, according to a 7:22 p.m. tweet by Metra.