AP
SYRACUSE, New York -- A 27-year-old Florida soccer coach accused of running away with a teenage girl had just started a new job in upstate New York to fund his travels with her when he was spotted and arrested, police said Monday.

Rian Rodriguez was taken into custody in suburban Syracuse on Friday night on a Florida felony charge of interference with child custody. Rodriguez, who was suspended from Fort White High School in Fort White, Florida, had a court hearing Monday to determine if he'd be extradited.

The 17-year-old girl sneaked out of her home in Fort White on Nov. 25, authorities said.

Her parents flew to Syracuse to get her on Saturday. Rodriguez had spent childhood vacations with relatives in the area, police said.

Attorney Charles Keller said Rodriguez consented to return to Florida and was being held in jail until Florida authorities pick him up within the next two weeks.

State police investigator Todd Grant told the Syracuse Post-Standard he spotted Rodriguez's car, a red Mercury Sable, on Friday after Rodriguez left an employee orientation at a Salina direct marketing firm. He said Rodriguez had planned to work to earn money to buy fake documents to cross the Canadian border with the girl.
Grant pulled over the car and arrested Rodriguez at gunpoint in a parking lot.

Ryan McManus, owner of Prime Time Marketing, told the Post-Standard that Rodriguez said he was moving from Florida and was living in a hotel. He said the teenage girl sat in the car during the two-hour orientation.

McManus said Rodriguez asked if the girl, who he called his "little cousin," could also have a job at the company.

A Florida high school soccer coach arrested over the weekend with a missing 17-year-old girl had previously been investigated for possibly having an inappropriate relationship with her, authorities said Monday.

Back in August, investigators in Columbia County, Florida, looked into an allegation that Rian Rodriguez, a 27-year-old coach at Fort White High School, and student Caitlyn Frisina were having a relationship, Murray Smith, the sheriff's public information officer, said at a news conference.

The girl's parents were notified and the coach was questioned, he said.

"There was nothing seen to be inappropriate," Smith said.

Smith didn't say if investigators had overlooked something. "This is an example of how a situation that starts out and doesn't meet the criteria of a criminal investigation can balloon into something that's out of control," he said.

Frisina went missing from her home on November 26, and investigators quickly determined she had left with Rodriguez.

A nationwide search ensued, and a New York State police officer found the two safe in a car on Friday near Syracuse.

Frisina was reunited with her mother and father and returned to Florida. They attended the news conference on Monday.

New York State Police did not respond Monday night to questions about Rodriguez's status or whether he has a defense attorney.

Rodriguez faces charges for interference with child custody, Columbia County Sheriff Mark Hunter said. Rodriguez waived extradition from Onondaga County, New York, on Monday during a court hearing and will be brought back to Florida in coming weeks.

Hunter said prosecutors will decide if Rodriguez will face other charges, such as kidnapping.

The sheriff didn't say if Caitlyn had left home willingly. "She looks very grown up," he noted. "She's a 17-year-old high school student who I feel was influenced by someone who was in control, who was in a supervisory role, and that shouldn't be."

"She's got a lot of growing up to do, even though she's a very strong young lady and a very good young lady. I have a lot of respect for her and I'm very proud of her that she did come and understands this is a big deal."

The search for Frisina and Rodriguez attracted nationwide attention, much like the search for Tad Cummins, a Tennessee teacher in his early 50s who disappeared for more than a month with a 15-year-old female student. They were located last April in California and Cummins was indicted on federal charges.

"We understand and we realize this was a very big deal and we have a long road ahead of us," she said. "We are already taking steps toward rebuilding our lives after such an emotional week."

Smith said one of Frisina's friends told investigators Rodriguez wanted to take Frisina out of the country.

Caitlyn had done a factory reset on her cell phone before she disappeared and had left it behind, and footprints leading away from her home indicated she was alone when she left, deputies have said.

Caitlyn withdrew $200 from an ATM in St. Mary's, Georgia, deputies said. She and Rodriguez were spotted on surveillance video at a food store in South Carolina and at a pawn shop in North Carolina, they said.

Smith said Rodriquez had a good reputation as a coach. There are no indications he was involved with other students, Smith said.

Smith also said the media played a major role in solving the case. "You guys were the driving force in getting the word out," he said. 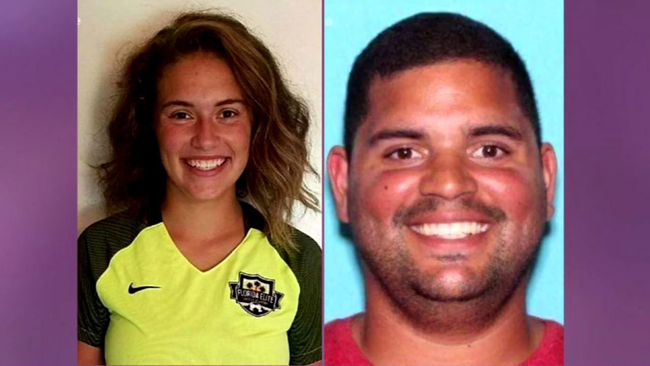