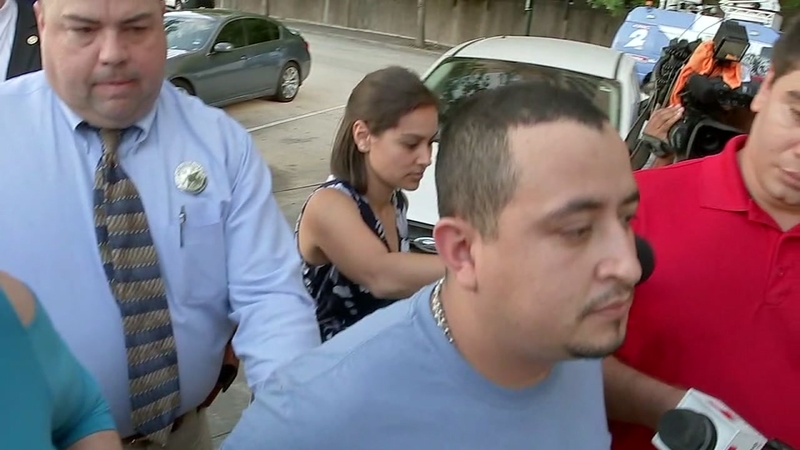 ATASCOCITA, Texas -- A convenience store clerk is accused of selling alcohol to a 17-year-old Kingwood High School student who later crashed his car into a tree, killing two passengers.

Atascocita High School students Chloe Robison and Salma Gomez were friends of Jaggar Smith, a teen who is charged with intoxication manslaughter after Robison and Gomez were killed in a drunk driving crash.
RELATED: Teen admitted to drinking MD 20/20 before crash that killed 2 classmates, prosecutors say

Gumaro Munoz "Romeo" Campos, 29, was arrested at a gas station convenience store on FM 1960 East in Atascocita on Sunday.

Campos was delivered to the booking office at the Harris County jail by the Texas Alcohol and Beverage Commission agents.

"I don't have to talk to you people," Campos said as he was escorted down to the sidewalk to the jail.

A few questions later, he responded, "I don't know what they're talking about." He denied selling alcohol to a minor and said he checked IDs for customers buying alcohol.

A store clerk in Atascocita was arrested for allegedly selling alcohol to a teen driving involved in the fatal crash that killed two Atascocita High School students.

The arresting officer said there is substantial evidence to support the charges against Campos.


A court document stated that Smith admitted to buying a bottle of MD 20/20 and drinking it prior to the crash in late July. He was charged with two counts of intoxication manslaughter and is now free on bond.

After the deaths of a young mother and her infant son who were struck by a suspected drunk driver, the Harris County District Attorney's Office announced a task force that would create a forensic trail from a drunk driving crash, to where the alcohol was obtained or purchased. The arrest is considered part of that effort.

A news conference is expected Monday with the district attorney and the task force focusing on Campos' arrest.

Smith's attorney released a statement on behalf of him and his family:

Jaggar and his family cannot adequately express the depths of their despair over the loss of two of the most beautiful lives imaginable. We will have no further public comment as no words could ever fill the hearts of the families and friends of Chloe and Salma.