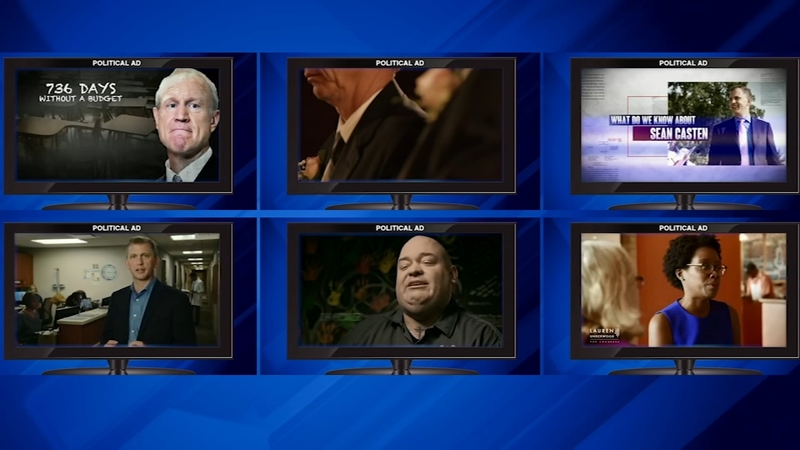 Airwaves flooded with political ads as Election Day draws near

CHICAGO (WLS) -- The final days of the election season means a flurry of activity from candidates and a blizzard of TV ads filling the airwaves. If you've thought that the only ads on TV these days are political ones, you may may not be that far off. In the last two months alone, the candidates in the governor's race and in the 6th Congressional District where Sean Casten is challenging incumbent Peter Roskam and the 14th district where Lauren Underwood is taking on incumbent Randy Hultgren, have aired more than 47,000 ads combined on broadcast, cable and radio.

But it's been ads by JB Pritzker and Bruce Rauner that have dominated the landscape.

Since Sept. 1, Pritzker has aired 20,199 ads on TV, and Rauner has shown 16,726 ads, according to figures provided by Advertising Analytics, which tracks ad buys.

"It's a lot of advertising and I think that's why people get kind of turned off by the end and keep in mind both these candidates have been on the air for months and months and months it's sort of been the Pritzker and Rauner show," said Eric Adelstein, Democratic media strategist.

But the numbers from the race between Hultgren and Underwood may be the most striking according to Advertising Analytics.

Since Sept. 1, Underwood has outspent Hultgren three-to-one: She spent $4.4 million to his $1.4 million. Just as striking is that Underwood's campaign and Democratic support committees are responsible for 93 percent of the ads that have been on television in that race, 3,577 by Underwood and just 257 by Hultgren.

"Randy has never taken a single race for granted - and he certainly isn't this round," Hultgren's campaign said in a statement. "He approaches each election with the same ferocity.... Yes, she is outspending us, which is easy when you have the progressive liberal elites like Nancy Pelosi, Rosie O'Donnell, Steny Hoyer, and Hillary Clinton pouring money in from Hollywood and New York City."

For those who think most of the political ads in these campaigns are negative, you are right. Experts say it works.

"There is a famous adage that people don't always know what they want, but they know what they don't want, and so that's sort of a reason negative advertising works," Edelstein said.