This time the vote garnered not just every Democrat in the House of Representatives, but also 10 Republicans. That is 10 more than the last time around, and it included one Illinois Republican.

"There are moments in time when you will look back when you're 80 years old and say, 'what did I do with my life?' and I think had I failed to take the position I did, I would feel a sense of regret," said U.S. Rep. Adam Kinzinger, R-Channahon.

U.S. Rep. Danny Davis, D-Chicago, said he knew what he had to do.

"I have heard from the people of the 7th District of Illinois. They have told me what to do. They have said, 'impeach this president,'" he said.

The Chicago Police Department conducted a training exercise downtown Wednesday night as security ramps up coast-to-coast ahead of Inauguration Day.

U.S. Rep. Mike Quigley, D-Chicago, also did not have any qualms about his vote.

"Never as a criminal defense attorney did I say, 'Judge, yeah my guy completed the armed robbery, but let's heal now.' No, there's accountability," he said.

The president himself did release a five-minute video shortly after the impeachment.

In it, he made no mention of what had just come to pass. Instead he condemned last week's violence and called on those who would commit further acts of destruction in the coming days not to do so.

There was heavy police presence for what was described as "a preparedness drill."

Domestic violent extremists are the number one terrorism threat in 2021, according to the FBI.

CPD said in statement, "This exercise is not being conducted in response to any incidents or planned events."

"Chicago will take whatever measures are needed," said U.S. Rep. Jesus "Chuy" Garcia, D-Chicago. "I don't think that there will be widespread violence."

Still, concern is rising about extremist unrest in the wake of last week's Capitol insurrection.

"Yes, we have received intelligence briefings that are really scary about what these groups are seeking to do," said U.S. Rep. Sean Casten, D-Downers Grove.

Earlier this week, federal authorities warned of armed protests at all 50 state capitols. Illinois State Police said they are ready to deal with any identified threats.

"Illinois is in jeopardy, everyone across the nation; everybody should be vigilant," said U.S. Rep. Marie Newman, D-La Grange. "You see something that concerns you, say something."

The FBI, Department of Homeland Security and National Counterterrorism Center have issued a joint intelligence bulletin on the matter.

They warn violent extremists could be targeting law enforcement; journalists; and racial, ethnic, and/or religious minorities.

As many as 20,000 National Guard members will be in Washington, D.C. during the inauguration, about 200 from Illinois, who mobilized from Peoria Thursday morning.

"This is a major security threat, and we are working to mitigate those threats," Washington, D.C. Acting Police Chief Robert Contee said.

Heightened security is already in place at airports and hotels. Airbnb also canceled all D.C reservations for inauguration week.

Along with D.C., of most concern are the state houses in Minnesota, Michigan, Wisconsin and Pennsylvania.

And ABC News has learned that the FBI is tracking two men who were part of last week's Capitol mob, who are allegedly planning to come back for an Inauguration Day attack.
Report a correction or typo
Related topics:
politicschicagoloopchannahondonald trumpimpeachmentu.s. & worldpresident donald trump
Copyright © 2021 WLS-TV. All Rights Reserved.
IMPEACHMENT 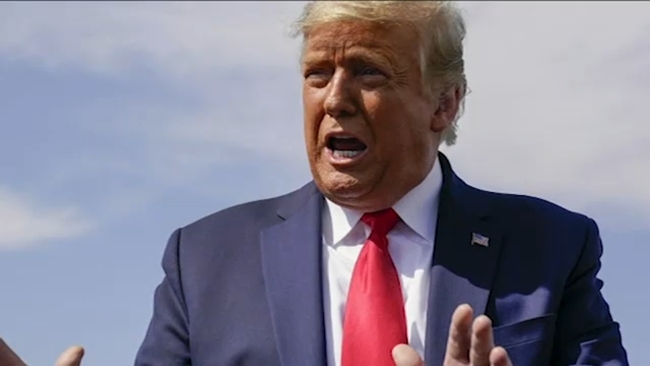