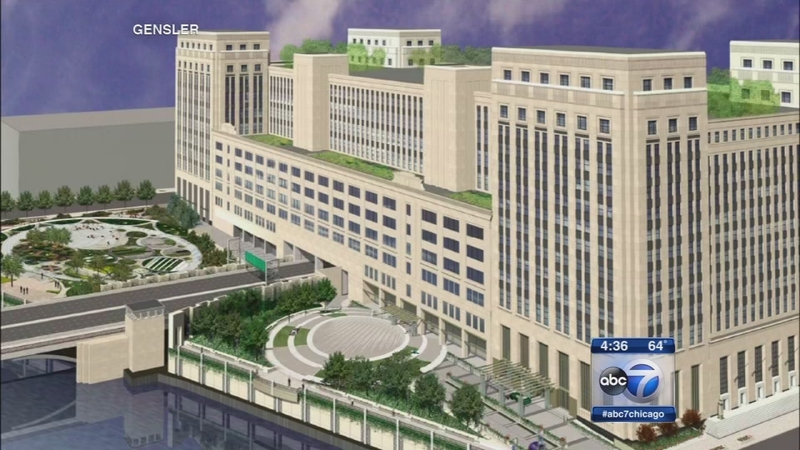 CHICAGO (WLS) -- Chicago's Old Main Post Office will see new life after an investment group struck a deal with the city on a $500 million redevelopment plan.

The massive landmark building in the West Loop, which has been vacant for over 20 years, will come back to life and Mayor Rahm Emanuel insists the project is not another episode of what his critics call "a tale of two cities."

"This morning we closed on the post office, which has been empty since 1995," Mayor Emanuel announced Friday morning.

The mayor told small business owners at Harold Washington College that Chicago is on a downtown development roll. The dafter the announcement of a 62-acre residential and commercial project at Roosevelt Road and Clark Street, the city OK'd the deal to repurpose the massive Old Post Office building over the Eisenhower Expressway for restaurants, shops and outdoor spaces.

"We'll now have a $500 million investment, thousands and thousands of jobs and will be a beehive of economic activity and businesses there," Emanuel said.

Emanuel has been roundly criticized by opponents who allege he focuses to much attention on downtown development and not enough on Chicago's neighborhoods.

"It's us against them," says Harvey Brown, an Englewood resident. "It's the haves and have-nots."

Brown has lived in his uncle's South Side Englewood house for 48 years, and says the city won't demolish most abandoned houses in the neighborhood or cut weeds in vacant lots, let alone help develop new businesses there.

"Downtown is being brought up and we're just wasting away," Brown says.

"Pitting one part of the city against another is a false choice," Emanuel said. He insisted the city does not neglect neighborhoods, saying this week the CTA improved service to and from downtown where jobs are growing. He also said the Roosevelt Road and Post Office projects will benefit the entire city.

"It creates the revenue to invest in our schools, in our safety, and helps us grow the economy to also deal with our fiscal challenges," he said.