WLS
CLEVELAND (WLS) -- Declaring America in crisis, Donald Trump pledged to cheering Republicans and still-skeptical voters Thursday night that as president he will restore the safety they fear they're losing, strictly curb immigration and save the nation from a Hillary Clinton record of "death, destruction, terrorism and weakness."

Confidently addressing the finale of his party's less-than-smooth national convention, the billionaire businessman declared the nation's problems too staggering to be fixed within the confines of traditional politics.

A political novice, he completed the greatest step yet in his improbable rise, accepting the GOP nomination to face Clinton, the former first lady, senator and secretary of state. 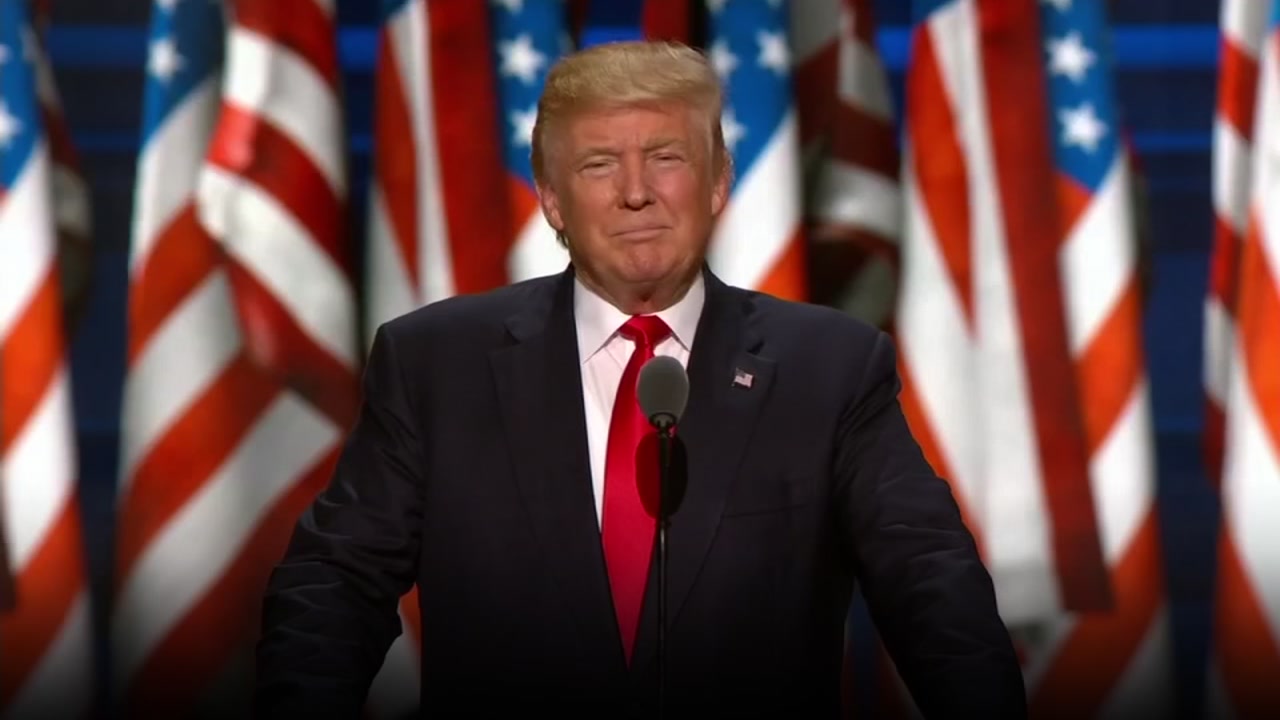 Trump's address on the closing night of the Republican convention marked his highest-profile opportunity yet to show voters he's prepared for the presidency. He set aside much of his usual bravado.

As the crowd, fiercely opposed to Clinton, broke out in its oft-used chant of, "Lock her up," he waved them off, and instead declared, "Let's defeat her in November."

He offered himself as a powerful ally of those who feel Washington has left them behind.

"I'm with you, and I will fight for you, and I will win for you," he declared. "I have joined the political arena so that the powerful can no longer beat up on people that cannot defend themselves."

He accused Clinton, his far-more-experienced Democratic rival, of utterly lacking the good judgment to serve in the White House and as the military's commander in chief.

"This is the legacy of Hillary Clinton: death, destruction and weakness," he said. "But Hillary Clinton's legacy does not have to be America's legacy."

In a direct appeal to Americans shaken by a summer of violence at home and around the world, Trump promised that if he takes office in January, "safety will be restored." 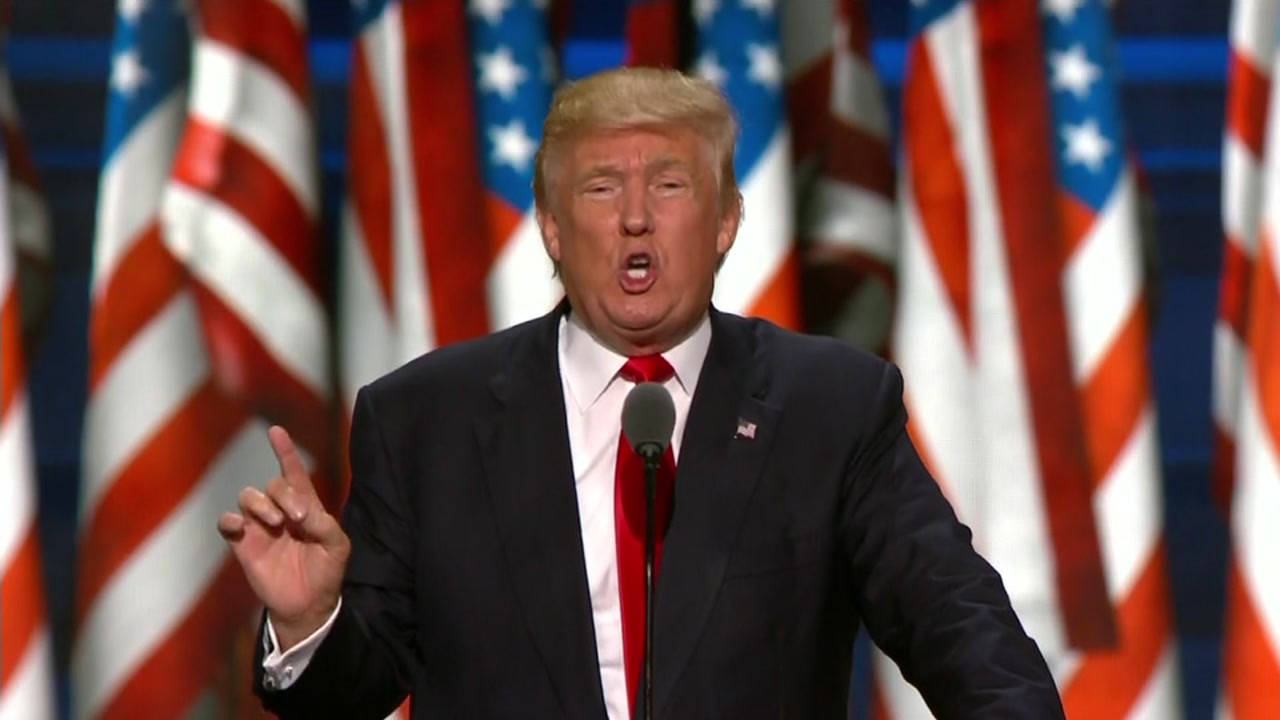 As Trump moved into the general election campaign, he stuck to the controversial proposals of his primary campaign, including building a wall along the entire U.S.-Mexico border and suspending immigration from nations "compromised by terrorism."

But in a nod to a broader swath of Americans, he vowed to protect gays and lesbians from violence and oppression, and said he would ensure that young people in predominantly black cities "have as much of a right to live out their dreams as any other child in America."

He was introduced by his daughter Ivanka who announced a childcare policy proposal that the campaign had not mentioned before.

"As president, my father will change the labor laws that were put in place at a time when women weren't a significant portion of the workplace, and he will focus on making quality childcare affordable and accessible for all," she said.

Trump took the stage in Cleveland facing a daunting array of challenges, many of his own making. Though he vanquished 16 primary rivals, he's viewed with unprecedented negativity by the broader electorate, and is struggling in particular with younger voters and minorities, groups GOP leaders know they need for the party to grow.

Trump did not repeat those comments from the convention stage. But he did disavow America's foreign policy posture under both Democrat and Republican presidents, criticizing "fifteen years of wars in the Middle East" and declaring that "Americanism, not globalism, will be our credo."

"As long as we are led by politicians who will not put 'America First,' then we can be assured that other nations will not treat America with respect," he said.

He had promised to describe "major, major" tax cuts. But his economic proposals Thursday night were vague, centering on unspecified plans to create millions of jobs. He promised a "simplified" tax system for the middle class and businesses, fewer regulations and renegotiation of trade deals that he says have put working class Americans at a disadvantage.

"These are the forgotten men and women of our country," he said. "People who work hard but no longer have a voice."

"I think everything Mr. Trump is saying is resonating with the people of the United States," Anthony Iosco said.

At every turn, Trump drew sharp contrasts with Clinton, casting her as both unqualified for the presidency and too tied to Washington elites to understand voters' struggles. Her greatest accomplishment, Trump said, was avoiding punishment from the FBI for her use of a private email and personal server while as secretary of state.

Indeed, Clinton was aggressively attacked throughout the four-day Republican convention, with delegates repeatedly chanting, "Lock her up."

Democrats will formally nominate Clinton at their convention next week in Philadelphia. Clinton was on the verge of naming a running mate to join her in taking on Trump and his vice presidential pick, Indiana Gov. Mike Pence, in the general election. Virginia Sen. Tim Kaine has emerged as her top choice.

Indiana Governor Mike Pence gave the keynote address Wednesday night, formally accepting his party's nomination for vice president, but his speech was overshadowed by Texas Senator Ted Cruz's speech in which he refused to endorse Trump.

Donald Trump is expected to accept the Republican Party?s nomination for president Thursday night as he delivers the final speech of the Republican National Convention.

It sounded like it was going to happen, but it didn't.

"Stand and speak, and vote your conscience, vote for candidates up and down the ticket who you trust to defend our freedom and to be faithful to the constitution," Cruz told the crowd. In response, they booed him as he left his stage.

Cruz was heckled again at the Texas Delegation breakfast Thursday. Many are angry that Cruz hasn't honored a primary pledge to support the party nominee, but Cruz has implied his lack of support has personal roots.

"I'm not going to come like a puppy dog and say thank you very much for maligning my wife and maligning my father," he said.

It was Ted Cruz's character being questioned Thursday.

"The problem is, no one likes him, he is so unlikeable. Literally no fans, no friends. And he only became anti-establishment when he couldn't be part of the establishment," said Donald Trump Jr.

But some in the Illinois delegation were taken aback by the booing and the general negativity surrounding Cruz's speech.

"I was just shocked, shocked at their treatment of him and us, frankly," said Christian Gramm, an Illinois delegate and Cruz supporter.

Gramm and delegate Jim Fisher, both Cruz supporters, walked out of Thursday morning's Illinois delegation breakfast when a speaker said shouting down Cruz was fun.

"I don't understand what's wrong with telling people to vote their conscience, unless you have none," Gramm said.

Trump now faces a dual challenge - to unite both the Republican Party and the country around his candidacy following a controversial and contentious convention.

The four-day event began chaotically with "Never Trump" delegates demanding a state by state roll call to establish the rules, followed by accusations of plagiarism in Melania Trump's speech, accusations from delegates that party leadership was trying to silence opposition, and refusals by top Republican lawmakers, office-holders and leaders to endorse Trump or even attend the convention.

A Trump campaign speechwriter took the blame for the use of passages from Michelle Obama's 2008 convention speech nearly word-for-word on Wednesday, saying she had offered her resignation but the campaign refused it.

On Wednesday, a member of the Illinois Delegation was stripped of her credentials and removed from the convention after publishing a racist Facebook post.
"It was repugnant. There's no place for racism or threats of violence in the Illinois Republican Party," said Tim Schneider, state party chairman.

The one theme on which convention-goers and speakers seem to be united is a hardline stance against Hillary Clinton. All days of the convention have featured speakers excoriating the presumptive Democratic presidential nominee, particularly focusing on the Benghazi attacks and chants of "Lock her up!"

Ivanka Trump and Chelsea Clinton share about their parents

Most compelling moments from the 2016 Republican and Democratic National Conventions

Clinton vs. Trump: Their words about each other
More Videos
From CNN Newsource affiliates
TOP STORIES