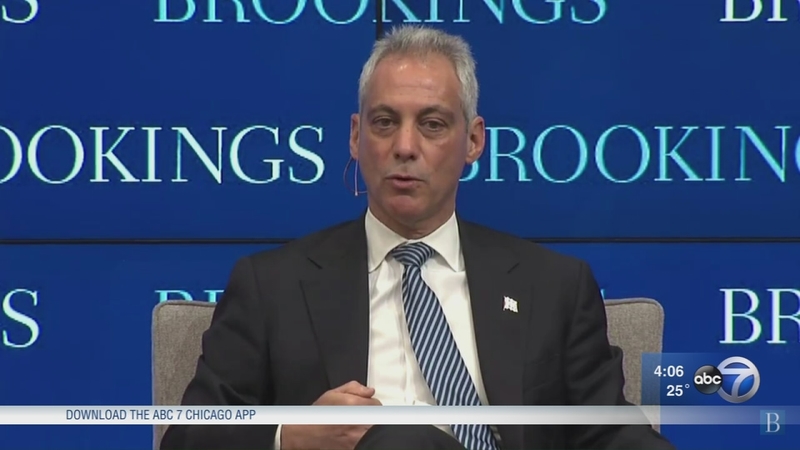 Emanuel gets his groove back

After a years-long absence from the national stage, Rahm Emanuel spent three, high-profile days this week in Washington. There, he reclaimed his role as a Democratic Party leader and spokesman.

As a guest of the Brookings Institute on Friday morning, Emanuel said Hillary Clinton's campaign focused too much on President-elect Donald Trump's negatives and not enough on the economic insecurities of an angry electorate.

"The hammer was very focused on breaking up and moving the political system into a place that would actually address these core insecurities," said Mayor Emanuel.

Emanuel, who worked in the Clinton and Obama White Houses, met face-to-face with President-elect Trump on Tuesday.

The mayor is no stranger to Washington. He solidified his Capitol Hill chops in 2006 when he chaired the Democratic Party's then-successful effort to reclaim the House of Representatives.

"I think he's always been a national leader for the Democratic Party by virtue of what he was doing when he was in Congress, the number four guy in Congress, and what he did for Obama," said Democratic Senate President John Cullerton.

During the past year, most noticeably during the Democratic convention, Emanuel appeared to avoid the national spotlight, keeping a lower profile in the wake of the Laquan McDonald police shooting controversy.

Emanuel was called on to represent all sanctuary cities while in Washington. He cast himself as the anti-Trump on immigration policy.

"I think the worst thing would be for the mayor to duck on those issues at a time when people who live in our neighborhoods are being threatened with removal," said Rep. Mike Quigley, D-Chicago.

There was a flash of vintage Emanuel on Thursday night. He reportedly "flipped off" a Washington reporter who asked if he'd run for president in 2020.

"There are more meaningful things to cover than the mayor's reaction when a reporter kept interrupting him when he was having dinner," said Emanuel's spokesman Adam Collins on Friday.

Emanuel denies any interest in a presidential run and has expressed no interest in chairing the Democratic National Committee.

In so far as how the party might rebuild itself, Emanuel told the Brookings moderator that Democrats who are strong in big cities should look to surrounding suburbs.

"There's an opportunity in the suburbs. They're getting more metropolitan in their own outlook and demographics," said Emanuel.