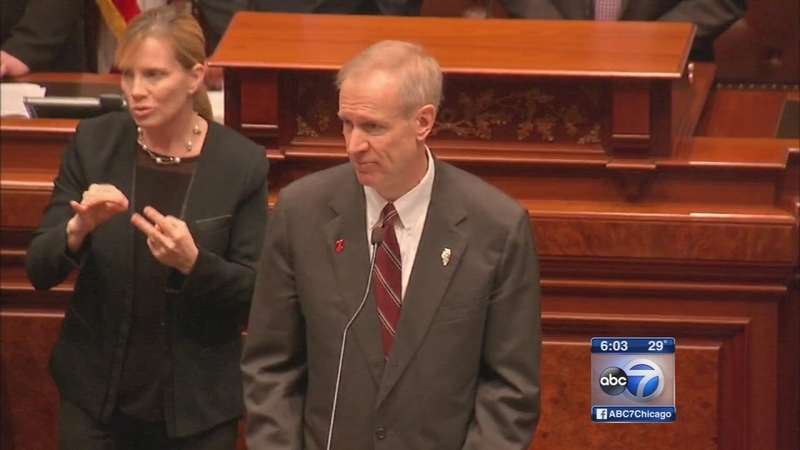 The Republican governor arrived in the chamber to polite applause. He challenged majority Democratic lawmakers to either compromise on his reform agenda or give him the power to cut spending by the billions of dollars.

"You choose, but please choose now," he said.

At several points during the 27-minute speech, the Democratic leaders looked incredulous. Senate President John Cullerton actually made a face.

Rauner repeated that he would not budge on his demands for pro-business, anti-union reforms before signing off on any tax increase.

"I'm insisting that we attack the root causes of our dismal economic performance," Rauner said.

Outside the chamber hundreds of demonstrators demanded the state resume funding social services programs and universities.

"I've been wondering why there aren't more people in the streets and this is, to me, a relief. The question is why we don't solve the problem quickly and we had better," said State Sen. Daniel Biss.

Some of the protesters demanded an increase in state taxes that one leader called among the lowest in the country.

"We're calling for spending billions of dollars more just to move us out of the bottom of the barrel," said Amisha Patel, Grassroots Collaborative.

"His plan would turn Illinois around alright - all the way back to the time of the robber barons at the end of the 19th century," she said.

But the governor, who promised to fully fund K-12 education next year despite the budget impasse, held fast to his no-tax-increases-without-reforms position.

"I won't support new revenue unless we have major structural reforms to grow more jobs and get more value for taxpayers," Rauner said.

"That's an extreme economic theory, no one in America has followed that theory since 1933," said House Speaker Mike Madigan.

At the end of his speech, the governor extended his hand to show his willingness to compromise.

"With respect, I humbly ask you to join me in transforming our state for the better," Rauner said.