WLS
By Sarah Schulte and Laura Podesta
SPRINGFIELD, Ill. (WLS) -- Illinois residents woke up to a new reality Thursday. The failure to pass a budget for the third year in a row made the state one-of-a-kind. People are fed up with Springfield, but still, no action.

ABC 7 had a one-on-one with Governor Bruce Rauner and he responded to the budget crisis.

"Dereliction of duty" is the phrase the governor kept using Thursday as well as Wednesday. Like Wednesday, he continued to blame the budget impasse on the Democrats. All of this comes as the credit agencies have once again for the seventh time downgraded the state of Illinois.

"Let me remind you that in all of his time the state of Illinois has existed we have never once gone without a budget until Governor Rauner took office," Susana Mendoza, Illinois Comptroller, said.

Mendoza said her office has to deal with over $14 billion of unpaid bills and $800 million in late interest and penalties.

Knowing the Governor Rauner would veto a budget that included tax increases, House Democrats left town without voting on a Senate-passed budget. The governor said all along he would only sign a budget with tax increases if it included reforms like workman's comp or a property tax freeze, two things Democrats have passed but the governor said the bills don't go far enough.

"The majority of the House has shown no interest in any real changes to the system but I hope we can work something out with senators and then all of us together, Democrats and Republicans, put pressure on the House majority so they aren't just loyal to their political positions, they actually want to do things that are good for the people of Illinois," Governor Rauner said. "I believe we can get there, we just got to stay persistent."

Lawmakers plan to return sometime this month but they are still far apart.

"Every time we try to get close with him, he says it's not good enough," State Rep. Elaine Nekritz (D) Northbrook said.

Months ago, the Senate was very close to passing a budget with Republican support but Democrats said the governor killed it at the last minute.

"He hijacked the grand bargain in the middle of the process. Told the Republicans to vote no and didn't give the support and the same thing happened in the House and as a result we don't have a budget," State Senate President John Cullerton (D) said.

Governor Rauner did applaud Senate Democrats for passing some of his reforms.

Most of the governor's venom is aimed at Michael Madigan and House Democrats.

The situation without a budget three years running is dire - so much so that U.S. Congressman Bill Foster (D-Illinois) weighed in overnight.

"Illinois is the first state in eight decades to go without a budget, and Springfield's continued failure to pass a budget has caused irreparable damage to our schools, roads and medical assistance facilities in our state. This budget failure will continue to hurt school children, seniors in nursing homes, the disabled and any taxpayer who is fed up running the state on a high interest credit card. I am particularly disappointed that this failure seems largely driven by Governor Rauner's complete inflexibility on any proposed budget deal. We already have a President in the White House who seems to lack an understanding of the legislative and budgetary process. Unfortunately, Governor Rauner also shows no appetite for reasonable compromise that true leaders need in order to do their job," Foster wrote.

So what exactly happened Wednesday night? Not wanting to take the political risk of sending a budget to Republican Governor Bruce Rauner that he would then veto, Illinois House Democrats chose not to vote at all on a Senate budget plan that included tax hikes, missing the midnight deadline.

There's a glimmer of hope for a budget. The fiscal year doesn't begin until July 1, so there could be a last-minute supermajority vote before then.
Report a correction or typo
Related topics:
politicsspringfieldchicagoloopbruce raunerprotestmike madiganillinois budgetgeneral assembly
Copyright © 2020 WLS-TV. All Rights Reserved.
RELATED 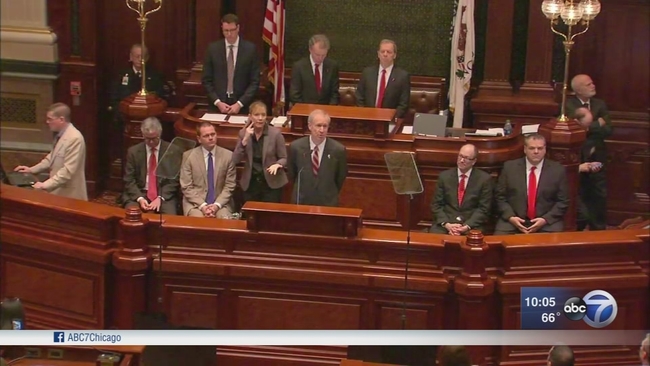 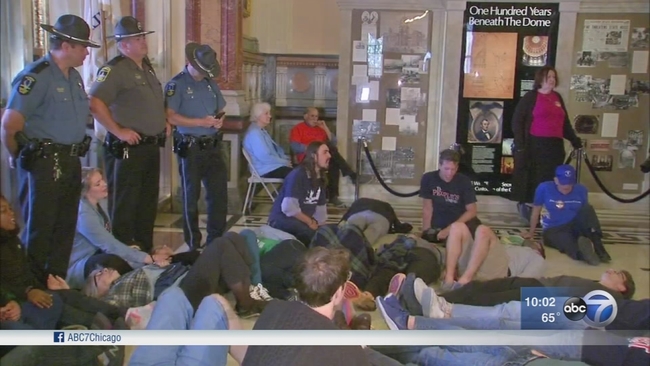