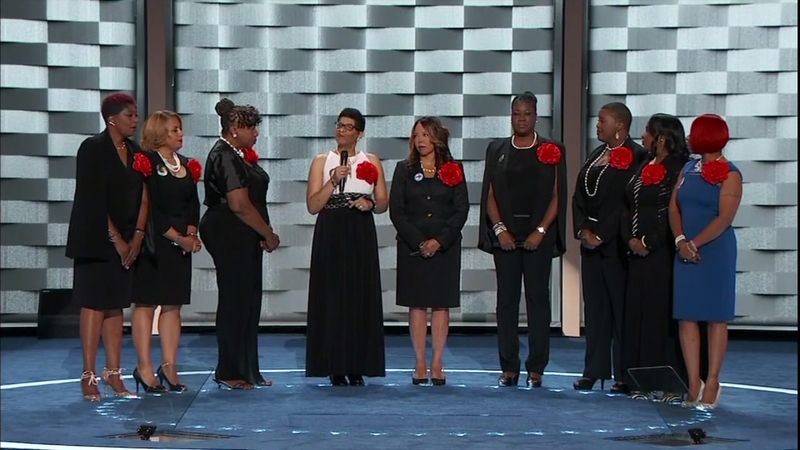 Mothers of the Movement speak at DNC

PHILADELPHIA, Pennsylvania -- They share a bond in tragedy and on Tuesday at the Democratic National Convention, a group of grieving women who call themselves 'Mothers of the Movement' told their stories of loss.

The women in the group have each lost children to gun violence or after contact with police. They've campaigned for Hillary Clinton across the country in recent months, advocating for criminal justice reforms and gun control.

Geneva Reed-Veal is the mother of Sandra Bland, who was found hanged in a Texas jail cell last year after her arrest during a traffic stop.

"I am here with Hillary Clinton tonight because she is a leader and a mother who will say our children's names," she said.

Sandra Bland's mother, Geneva Reed-Veal, spoke Tuesday at the DNC as part of Mothers of the Movement.

Sybrina Fulton, mother of Trayvon Martin, says she supports Hillary Clinton because the Democratic nominee "is a mother who can assure our movement will succeed."

Treyvon Martin's mother, Sybrina Fulton, spoke Tuesday at the DNC as part of Mothers of the Movement.

Lucia McBath spoke as well. She's the mother of 17-year-old Jordan Davis, who was fatally shot over loud music. She explained why she's supporting Clinton.

Jordan Davis' mother, Lucia McBath, spoke Tuesday at the DNC as part of Mothers of the Movement.

"She's the first presidential candidate that I'm aware of that has just said, 'This is a national crisis,'" said McBath. "It has to be dealt with. Our communities and our families will never be safe unless we deal with gun violence in this country."