The focus of this year's Rainbow PUSH convention is on economic justice. Clinton received a warm welcome as the keynote speaker at the convention, speaking at the International Women's Luncheon titled "Lifting as We Climb."

Clinton arrived at 2:08 p.m., almost 50 minutes late after making an earlier campaign appearance in Cincinnati with Senator Elizabeth Warren. Warren is a harsh critic of Donald Trump and is also reportedly being vetted as a possible vice presidential pick.

"Democrats are committed to Hillary, but they're not excited about here. She's been around a long time. Elizabeth Warren would be a fresh face, would be a new, exciting figure on the political scene," says ABC7 political analyst Laura Washington.

Hundreds of women stood in security lines at McCormick Place to be in there for the luncheon and Clinton's arrival, and rose to their feet when she took the stage. The crowd was filled with educated, socially conscious African American women eager to hear what Clinton had to say about gun violence, a women's right to healthcare and more.

Clinton received another standing ovation when she acknowledged that she will accept the Democratic nomination.

"In a few weeks in Philadelphia I will have high honor of accepting the Democratic Party's nomination for President of the United States," she said.

She hit hard on gun violence, and used much of her speech to address violence in Chicago and other cities.

"I think saving our children and other people from gun violence is a civil rights issue right now in America," Clinton said.

"Nance Holt is here. You may know her story of her handsome, wonderful son Blair, killed in 2007 on a Chicago city bus," Clinton said.

"We need someone who's going to address our issues, who's concerned about what's going on in urban communities, because that's something we have to deal with," said Annette Nance Holt.

Holt said she did not know she was going to be mentioned by name but she has met with Clinton both in public and private, as have other Chicago mothers who have lost children to gun violence in the city.

Clinton also acknowledged the congresswomen in attendance who held a sit-in to end gun violence, and the mothers who had begun that advocacy after their children had been killed.

She only mentioned Trump by name once, and focused most of her attention on her work and commitment to those who may be undecided.

"No one will fight harder for you and your families than I will, you can count on that," she said.

She spoke for about a half an hour, and by the end of her speech had clearly won over this crowd.

"Today was just- because it was a women's luncheon we felt that girl power and I was feeling like girls rule the world," said Pam Johnson afterward.

"It's the qualifications that count, and she is indeed by far the most qualified person to be president of the United State," said Karen Scott.

This is the 50th year for the luncheon, organized by Jacqueline Jackson. She said "we can elect a woman to lead this nation."

Rev. Jackson says it is critically important to have help from the White House with "blood running in our streets." He recently gave his endorsement to Clinton, calling her a history maker, one that he believes understands not only the need for jobs in Chicago but also the end to the violence.

"We can trust her to focus on economic development for the poorest people," he said. "That's what she has done on affordable healthcare, on gender equality, on racial justice. We can really trust her to have a big tent view of America and not a keyhole view of America."

Those attending the convention believe real work will get done here with the national spotlight on Chicago.

"Hillary Clinton is a woman," said Lillie Sanders, who is attending the convention. "She is a very knowledgeable woman, she's educated, she can talk to the entire community about the things we are going to need and emphasize the importance of voting because you are voiceless if you don't vote."

After speaking at the convention, Clinton attended an afternoon fundraising event with former Destiny's Child singer Michelle Williams. Tickets for the event were $2,700 a person.

Elsewhere, Trump called Warren "one of the lease productive senators in the U.S. Senate," and accused her of lying about being part Native American to advance her career, once again calling her "Pocahontas." This all happened as a new Washington Post-ABC News poll shows Trump trailing Clinton by 12 points, with nearly two-thirds of voters viewing him as unqualified to be president..

The Washington Post-ABC News survey has Clinton with 51 percent of the vote over Trump's 39 percent.

A Wall Street Journal-NBC News poll has Clinton with 46 percent and Trump with 41 percent among registered voters.

Trump tweeted that the poll is "dirty" and sampled heavily on Democrats. 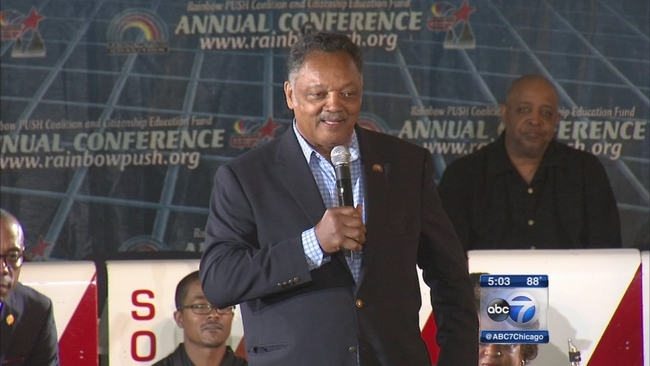