WLS
By Sarah Schulte and Laura Podesta and Cate Cauguiran 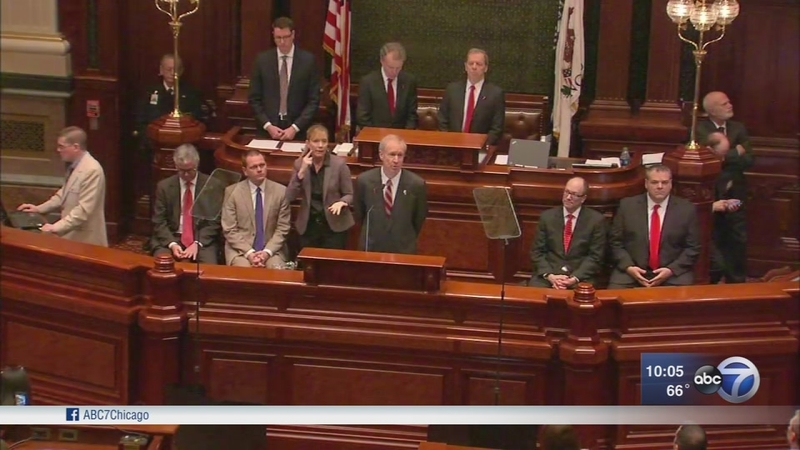 SPRINGFIELD, Ill. (WLS) -- Illinois House Speaker Michael Madigan said he will not bring a state budget to the floor for a vote Wednesday, bringing the budget impasse into its third year.

Madigan said lawmakers will continue to work on a budget through June.

As a result of the stalemate, the state has $14.5 billion in unpaid bills.

For his entire term in office Governor Bruce Rauner has run the state without a budget, costing the state billions of dollars, and once again lawmakers are going home empty-handed and armed with more blame for each other.

"Today we have a complete dereliction of duty by the majority in the General Assembly, and a tragic failure to serve the people of Illinois," Rauner said.

Unwilling to take the political risk when they knew it would be vetoed, House Democrats chose not to vote on a Senate budget plan that included income and sales tax hikes.

Rauner insists a budget with tax hikes must include "meaningful reforms," something House Speaker Madigan claimed they have done.

"Our record is very clear where we can show you that we've responded to the governor's request, we've worked with him and will continue to work with him on the budget-making. We're going to do that through the month of June," Madigan said.

With the budget impasse headed into its third year, lawmakers from both parties admit they are to blame.

"It's an absolute disgrace, I'm ashamed we haven't had a budget in the state for years. We are all to blame, we need to do our job because people in the state are suffering," said State Rep. David McSweeney (R-Barrington Hills).

The budget plan at hand, borne of months of bipartisan Senate negotiations, called for spending $37.3 billion fueled by $5.4 billion in tax increases. But Madigan said his members got skittish after watching a fickle Rauner during the Senate talks, allegedly often changing his mind on individual parts and pulling GOP members off votes while maintaining he was hands-off.

"Some of our people are concerned, having observed how the governor worked with the Senate Democrats, where he would negotiate, then back away, negotiate, back away," Madigan said. "They just don't have a high level of confidence in the way the governor has conducted himself."

The budget impasse has infuriated educators, who came from across Illinois to the state capitol to demand a budget while students took tours of the building. School superintendents told lawmakers they can no longer function without state money. The state owes school districts $1.1 billion.

"We are going to have to look at making significant budget cuts," said Dr. Karen Sullivan, Indian Prairie School District 204.

The state's fiscal year starts on July 1. If there's no deal by midnight, lawmakers will face a much higher bar to pass any budget legislation. They will need a three-fifths super majority instead of a simple majority.

Rauner has blamed Democrats for failing to address the pro-business "structural changes" he seeks, such as cost-cutting restrictions on workers' compensation. Legislative Republicans have insisted a 32 percent increase in the personal income tax rate, from 3.75 percent to 4.95 percent, be a part of taxpayer parity with the adoption of a local property tax freeze. Both chambers have approved workers' comp changes and the Senate adopted a two-year freeze on property taxes. But Rauner says neither goes far enough.

J.B. Pritzker of Chicago, a businessman seeking the Democratic nomination for governor, issued a stinging rebuke of Rauner.

"For 700 days, Bruce Rauner has held Illinois hostage to force his radical and deeply misguided agenda on our state," Pritzker said. "Our economy, social service agencies, schools, and families continue to suffer untold damage at Rauner's expense, as he works to shift blame at every turn."

"The providers of these services have exhausted their funding options, including their reserves, lines of credit and grants from angel donors," a coalition statement read. "Most have received no state payments since last fall. They simply cannot survive."

Lutheran Child and Family Services are just one of the organizations serving children in Illinois that is imperiled by the ongoing budget stalemate.

There are currently 30 kids who live and are being treated at Lutherbrook, but when summer ends those children will be forced to relocate back to their homes or into foster care.

"Knowing the kids what won't get help, knowing-knowing personally the staff that are affected by this, it's incredibly difficult," said Mike Bertrand, Lutheran Child and Family Services.

Lutheran Child and Family Services of Illinois is just one of many state organizations crippled by the budget stalemate. Earlier in May, the non-profit made a tough decision to shut down its historic Lutherbrook campus in Addison, forcing the kids getting treatment at the academy out.

"These are kids that have the greatest need within our state, that have severe emotional, behavioral problems due to the trauma they've experience," Bertrand said.

For nearly 150 years, Lutherbrook served as a residential treatment center helping children who were removed from their homes due to abuse and neglect, giving them round-the-lock resources including group, family and art therapy. But Bertrand said the state has forced the organization's hand.

"We can no longer continue to subsidize the cost of care at the level that makes up for the lack of reimbursement by the state of Illinois," he said.

In addition to closing the Lutherbrook campus, LCFS will close eight other outreach programs and that means layoffs for employees. LCFS said it will cut 100 jobs: 25 percent of its staff, the biggest cut the organization has ever made.

Bertrand said there could be more program and job cuts for LCFS. The organization is part of Pay Now Illinois, a coalition of human and social services that filed a lawsuit against the governor last year.

BUDGET PROTESTERS
On Tuesday, protesters expressed frustration about the lack of a budget. They stood in front of Gov. Bruce Rauner's office in Springfield, with police serving as a barrier.

Thirty-four protesters, who said they are furious about how the state's budget crisis has affected social service agencies and created cuts and layoffs, were arrested.

Protesters staging a sit in @GovRauner office in Springfield say they're not leaving until a budget is passed pic.twitter.com/5J2hugeI9K

Last year, Democrats in the Illinois House and Senate could not come up with a budget proposal to send to the governor. Lawmakers missed the deadline and each side had to create a short-term spending deal, which Rauner signed off on, to keep schools open.