Illinois Democrats dig up dirt from State Rep's past 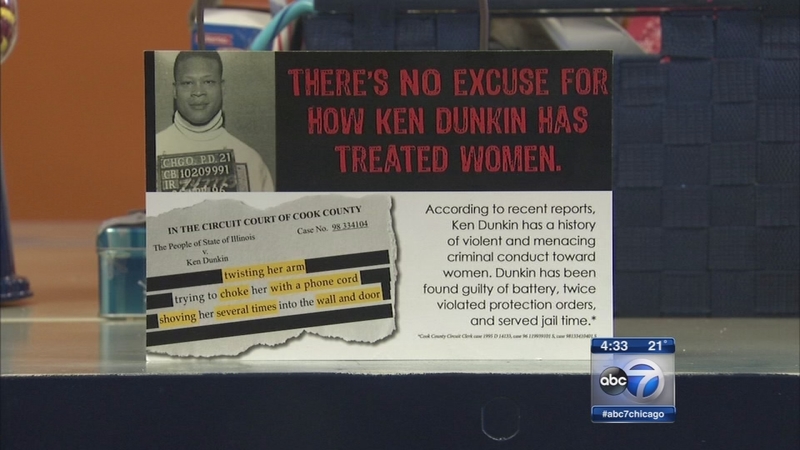 Springfield Democrats dig up dirt on one of their own

SPRINGFIELD (WLS) -- This time Thursday, State Rep. Ken Dunkin was flying high after President Obama said his name while talking about the value of compromise with Republicans. But as soon as the President left, Dunkin's hometown Dems dredged up some old dirt on him.

The return address on the cards is the Northside's 42nd Ward Democratic Organization. It is headed by Chicago Alderman Brendan Reilly. Reilly is a former aide and most-of-the-time loyalist of Illinois House Speaker Michael Madigan.

"If the speaker's successful with me, he'll have every member intimidated for the next 10 years," Dunkin says.

In a statement Friday, Dunkin wrote the mailer "shows the depths to which Mike Madigan and his minions are willing to go in their efforts to disenfranchise the voters."

According to documents provided by Alderman Reilly, Dunkin was convicted of violating orders of protection battery and sentenced to probation. But the victim in the 1996 case, who wished to remain anonymous, said the charges were exaggerated.

"He is not violent. He is not an abuser," she said. "He has done an amazing job in the community. It's unfortunate that something that happened 20 years ago would service to tarnish his character and who he is today."

The campaign manager for Juliana Stratton, Dunkin's primary opponent, denied Stratton was involved in the mailer, but Stratton's campaign did take responsibility for other negative flyers linking Dunkin to Gov. Rauner.

Friday is Ken Dunkin's 50th birthday. Lots of people at the party tonight will have plenty to talk about. That mugshot mailer proves again that in Chicago, as the late Mayor Harold Washington used to say, politics ain't beanbag.