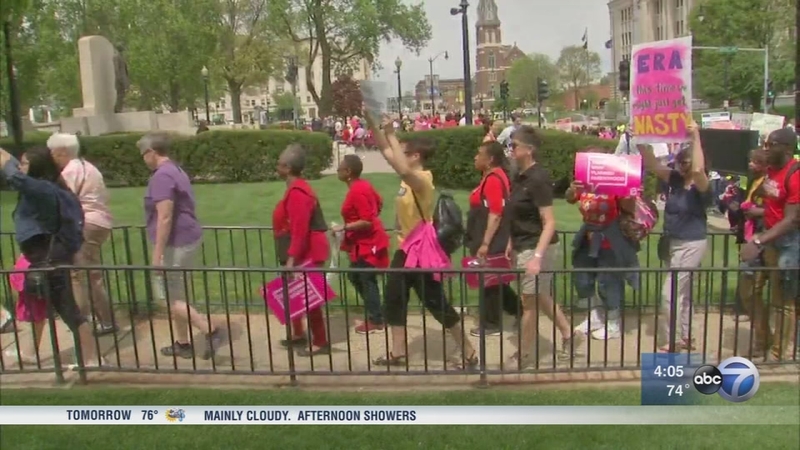 SPRINGFIELD, Ill. (WLS) -- Women from Chicago and across Illinois marched at the state capitol in Springfield, Ill., Tuesday, urging lawmakers to pass a budget and legislation to help women and families.

The march is just one of several events around the capitol focused on women's rights.

"The first time I remember marching for women's rights was when my daughter was about 6 years old," said Toni Oplt, protester. "It really is disheartening that we're still here."

Hundreds of women attended the rally, which came as the Illinois House took up HB 40, a bill that would keep abortion legal in the state should Roe v. Wade be overturned and expand abortion coverage under Medicaid and state employee health plans.

While the bill overall had enough votes to pass, it does not have a veto-proof majority. Governor Bruce Rauner, who says he is pro-choice, said he will veto the bill on the basis that it expands taxpayer funding for purely elective procedures.

Republican state Rep. Peter Breen of Lombard says Medicaid-funded abortions do not qualify for federal match so would cost Illinois an extra $60 million a year.

"We don't need 71 votes today. We need 60. ... There will be a lot of pressure on the governor to do the right thing and follow his promises and stick to his word," said State Representative Sara Feigenholtz.

But abortion wasn't the only thing on people's minds. As the state nears the two year mark without a budget, Rev. Jesse Jackson told the crowd he's trying to broker a summit between the parties.

"We should not adjust to this state of affairs and let ideology stand between us. Cullerton will do it, I think Madigan will do it, and I think the governor is more inclined to do it," Jackson said.

Frustrated by the failure of the so-called "Grand Bargain" that Senate leaders negotiated last winter, Majority Leader John Cullerton insists the ball is in the governor's court.

"So now we have to hope the governor comes back to Springfield from campaigning. Stop campaigning for six weeks, govern. And then he can campaign on some successes," Cullerton said.

Governor Rauner was not in Springfield Tuesday, but all four Democratic gubernatorial candidates were there in person, taking advantage of the rally to press the flesh and campaign for votes.