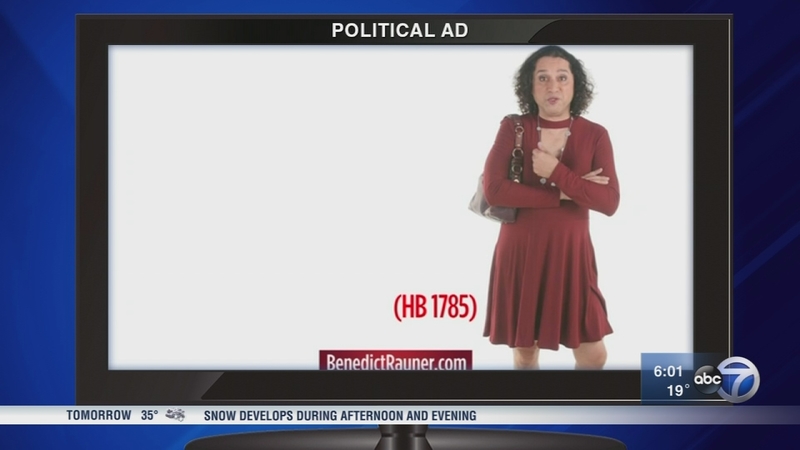 CHICAGO (WLS) -- A new ad by Jeanne Ives could generate a lot of controversy for the conservative Republican state representative who is challenging Governor Bruce Rauner in the primary.

Ives has made the hallmark of her campaign her claim that Bruce Rauner has abandoned the conservative wing of the Republican Party, and her new ad is already coming under fire before it has even officially hit the TV airwaves.

The ad, entitled "Thank You" and is clearly meant to appeal to social conservatives.

"Thank you for signing legislation that lets me use the girl's bathroom," the ad says.

The ad takes Governor Bruce Rauner to task for signing House Bill 40 which provides taxpayer funded abortions to poor women and state employees. It was a bill Rauner told party conservatives last Spring he would veto.

Another portion of the ad says, "Thank you for making all Illinois families pay for my abortions."

Ives ad also attacks Rauner over the so-called Sanctuary State law he signed and over the bi-partisan school funding bill he approved that contained what critics called the "Chicago bailout."

Another part of the ad says, "Thank you Bruce Rauner for making the rest of Illinois bail out Chicago teacher pension. And for giving Rahm everything he wanted and more."

"This one is very edgy. She is really going for the jugular on this one, and she's going for the heart of Rauner's conservative base," Washington said. "It's going to anger voters who are upset with Bruce Rauner."

Republican Cook County Commissioner Sean Morrison tweeted: "This is absolutely disgusting and unacceptable, racially bigoted and demeaning offensive attack ad. Another reason Jeanne Ives is unelectable in an Illinois general election. Ask what those elected officials who endorse her think???"

Governor Bruce Rauner's campaign did not directly address the ad, but said: "Representative Ives has already admitted that she's not willing to take on Mike Madigan and will keep his 32% tax hike - not surprising given her history of opposing property tax reductions. Looks like JB Pritzker has some competition as Mike Madigan's favorite candidate."
Ives makes no apologies about the ad saying, "the ad represents Governor Rauner's chosen constituents based on the policy choices he made, as well as a fair and accurate representation of the implications of those policy choices."

In an email to his supporters Friday night, candidate Chris Kennedy responded to the ad: "You might've heard a few weeks ago that I stood up and left a forum because the candidate next to me offered an ignorant, simple solution to a complex issue that plagues our state.

Today, that same candidate released an ad that is appalling and disrespectful to everyone who makes Illinois what it is today. It's a slap in the face to everyone who's brought progress and inclusivity to Illinois. Take a look for yourself. We already have enough hate and bigotry in the White House. We don't need a governor who stands silent against Donald Trump, and we certainly don't need a governor who echoes Donald Trump."

Tracy Baim, publisher of the Windy City Times, called the ad, "appalling and transphobic and out of step with the laws of the state of Illinois."

The Chicago Teachers Union responded, ''We will not dignify that ad or that individual with a response."