Karen Lewis will not run for Chicago mayor, expected to undergo chemotherapy to fight brain tumor 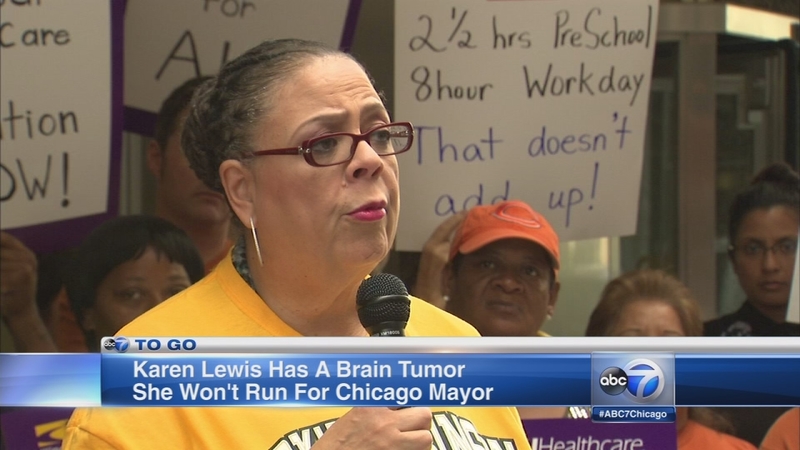 An ABC7 Eyewitness News source confirms the Chicago Sun-Times report that Lewis will not run for mayor because of the tumor. The 61-year-old underwent a five-hour surgery at Northwestern Memorial Hospital on Oct. 5, the source said.

Lewis was considered to be an early front runner in the race for Chicago mayor. Her exploratory committee announced her decision to pull out of the race on Monday.

"Karen Lewis has decided not to pursue a mayoral bid. Yet she charges us to continue fighting for strong neighborhood schools, safe communities and good jobs for everyone," the committee's coordinator said in a statement.

The CTU has handed her duties to Vice President Jesse Sharkey until she recovers. Dr. Richard Byrne, Chairman of Neurosurgery at Rush University Medical Center, said depending on the tumor's location and size, recovery could take some time.

"If you're talking about a brain tumor that needs to go to the operating room in an emergency circumstance, that's often because it has so much volume - or mass effect - or it's trapped important fluid spaces in the brain where things can get aggressively worse, quickly. That's why sometimes we have to take patients into the emergency room in an emergent basis," Byrne said.

"Karen is resilient and strong and will be back advocating for educators and students and Chicagoans in no time," 2nd Ward Alderman Bob Fioretti said.

"I have always respected and admired Karen's willingness to step up and be part of the conversation about our city's future, but nothing is more important than a person's health. Along with all Chicagoans, I will keep Karen and her family in our thoughts and prayers," Emanuel said.

"Her passion for schools and education of our children is second to none. Hopefully she'll be back soon, doing what she does best," said Alderman Joe Moore, who serves the 49th Ward.