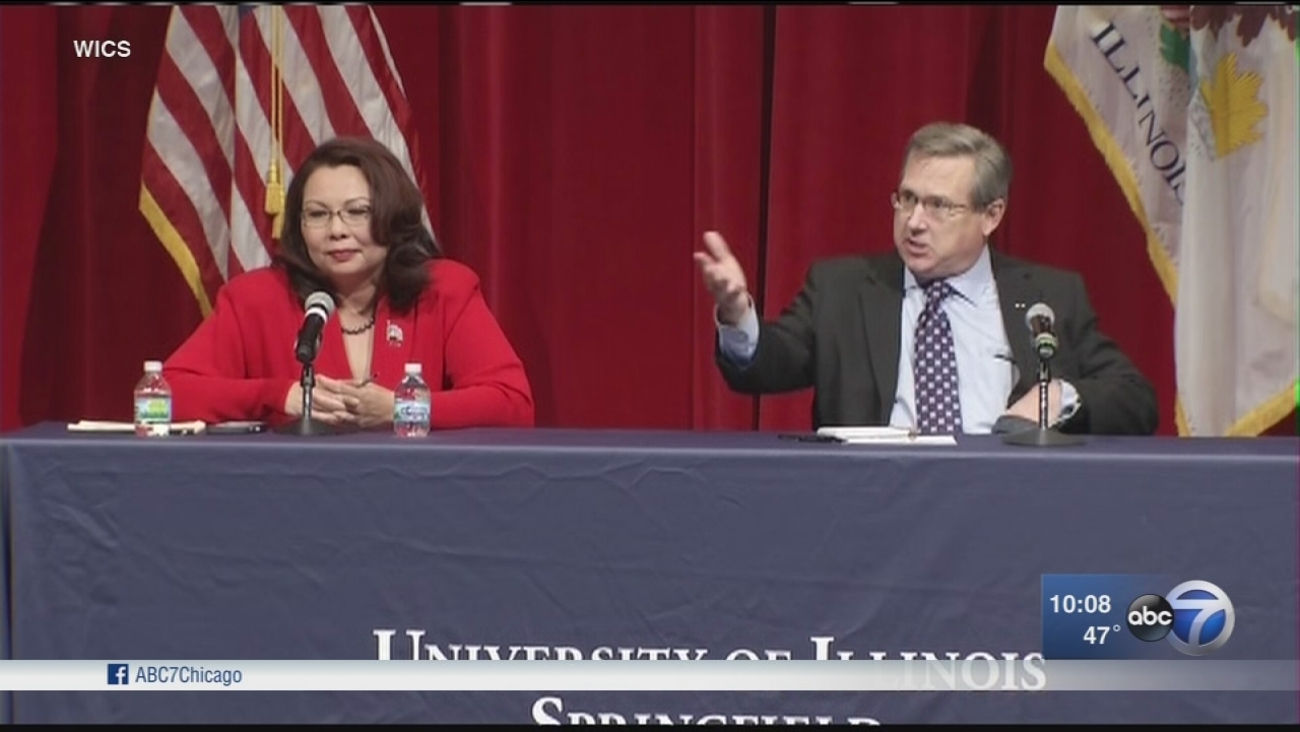 Mark Kirk and Tammy Duckworth faced off Thursday night in their second debate in the U.S. Senate race. (WLS)

CHICAGO (WLS) -- Mark Kirk and Tammy Duckworth faced off Thursday night in their second debate in the U.S. Senate race.

First-term Republican incumbent Kirk said his 2012 stroke had made him stronger.

"When you conquer something as difficult as a stroke, you get in there and you fight, fight, fight for the people of Illinois," Kirk said.

"I think the Senator's perfectly capable of doing his job. The concern I have is he's not doing his job," Duckworth responded.

Congresswoman Duckworth, herself disabled by Iraq war wounds, was asked about the lawsuit filed by whistleblowers who alleged Duckworth, when she ran the state Veterans Affairs Department, retaliated against them when they reported abuse at a downstate veterans home.

"Their lawsuit has been thrown out of court at least two times," she said.

"Its important, Tammy, not to lie to the people of Illinois," Kirk interrupted.

"The lawsuit has been thrown out, dismissed at least two times fully," Duckworth said again.

"The litigants are sitting right here. It's important not to lie to these people," Kirk responded.

The candidates also sparred on how Syrian refugees should be allowed to immigrate to the United States.

"We are not a nation that turns our backs on children drowning in the Mediterranean," Duckworth said.

"We should know who's entering into the United States and we should not admit those who want to kill us," Kirk said.

Kirk called for a fairer, flatter tax rate and tax breaks for companies willing to re-base their operations in the United States.

Duckworth wants tax breaks for small businesses and the middle class, recalling her own impoverished and she said sometimes hungry childhood.

"She wants to spend more and tax more and borrow more and push us even farther in the red. I want to spend less and tax less to make sure we can fix this economy," he said.

In one of the few light moments during the debate, Senator Kirk joked that he and Duckworth agreed on one key point: that they both think next senator from Illinois should use a wheelchair
Related topics:
politicsdebatemark kirk2016 electiontammy duckworth
Copyright © 2020 WLS-TV. All Rights Reserved.
More Videos
From CNN Newsource affiliates
TOP STORIES