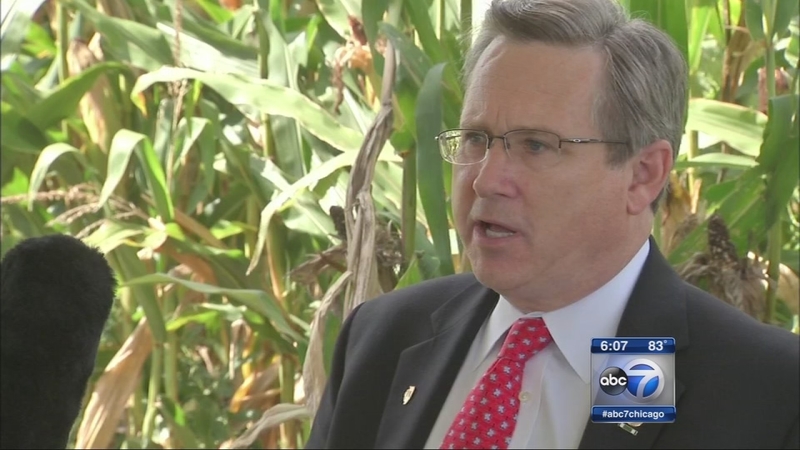 NORMAL, Ill. (WLS) -- The two candidates for U.S. Senate in Illinois took part in a forum in Normal on Wednesday.

The Illinois U.S. Senate campaigns and its controversies continued in a clearing - literally surrounded by cornfields - in central Illinois.

The candidates arrived and appeared at the Kelley farm separately and did not come in contact with each other. Democrat Duckworth did not mention Mark Kirk as she focused on agricultural issues.

"Know that I am going to work on getting Illinois farmers the resources you need to grow your businesses and to support our local economy," Duckworth said.

During audience questions, Duckworth defended her support for a plan to allow Syrian refugees entry to the United States. When Republican Kirk took the stage, he wasted no time attacking his challenger.

"Tammy Duckworth, I understand, told you that all 200,000 Syrian refugees would be 'thoroughly vetted.' She lied to you right here in this farm here," Kirk said.

"I know there's a temptation, particularly for those politicians that are on the ballot, to say outrageous things to try to get attention," said Josh Earnest, White House spokesman.

"I have a problem, definitely, with sending $400 million in 500E notes directly to the Ayatollah," Kirk said.

"I just don't think that's language befitting of a United States Senator. I think it diminishes the office and he should apologize," Duckworth said.

But Kirk will not apologize. A reporter asked Kirk about Duckworth's assessment that the incumbent's 2012 stroke may have caused him to become "unhinged".

Kirk responded: "She would denigrate any stroke victim in America and make fun of them and that's awful."