When asked Tuesday morning how she feels after her historic inauguration, Lightfoot said, "Pretty good."

Lori Lightfoot is officially sworn in as the 56th mayor of Chicago.

Mayor Lightfoot held a meeting with her cabinet, including Chicago Police Superintendent Eddie Johnson. Public safety is a top concern for the new mayor.

Lightfoot and police are well aware of the city's usual trouble spots, and the mayor said she will be very visible this weekend in those areas. Her public safety plan, which she laid out during her inauguration Monday, calls for making every neighborhood safe, but it is being received with some skepticism.

"I've watched the city take a lot of different approaches to stop the violence, I've yet to see one work," said Tamar Manasseh, founder of Mothers Against Senseless Killings (MASK).

Manasseh has been trying to stop the violence at the corner of 75th and Stewart in Englewood for the past four summers. Now the founder of MASK is getting ready to open a pocket community center, with shipping containers serving as classrooms for things like job training and more.

She is hoping Lightfoot's plan of bringing together many city services and creating jobs and opportunities on the south and west sides will help stem the violence.

Lightfoot said she understands the skepticism some feel towards her inaugural promises.

"I certainly appreciate that, but we have placed an emphasis on making sure that, on that we don't treat this as a law enforcement first and only strategy," she said.

"I think one of the problems, Craig, that we see right now in communities like this is hopelessness," said Father Michael Pfleger of St. Sabina Church in Auburn Gresham.

"She wants to get to the root of this violence, which is investment and opportunity, not just in jobs and in housing and in building community, education," he said.

Lightfoot said traditional trouble spots will get a lot of police attention this weekend.

"I'll be out, very, very visible, in those areas over the course of the weekend," she said. "We want people to enjoy what promises to be fairly warm weather, but enjoy it safely. And I want to make sure our kids are safe."

Lightfoot made it clear Monday that Chicago's challenges will not be solved overnight. When it comest o public safety, Pfleger said Lightfoot won't solve the crime problem in one four-year term, but she could at least get the city heading in the right direction.

Mayor Lightfoot did not have any public appearances Tuesday, but her first City Council meeting is scheduled for next Wednesday May 29.

Samantha Fields will serve as Lightfoot's Senior Advisor for Legislative Counsel and Government Affairs. Fields has previously held positions at the state and local levels, including serving as First Deputy Director of LCGA, the mayor's office said.

Samir Mayekar will serve as Deputy Mayor for Neighborhood and Economic Development. Mayekar previous served in the Obama administration in both the White House and a federal infrastructure finance agency. He's also co-founder and CEO of NanoGraf Corporation, a green energy company based in Bronzeville.

Marisa Novara will serve as Commissioner of housing. Lightfoot's office said she has more than 15 years of experience in affordable housing development and housing policy. She previously serviced as vice president at the Metropolitan Planning Council.

Manuel Perez will serve as Managing Deputy Director of Legislative Counsel and Governmental affairs. He was Lightfoot's campaign manager for the runoff election, as well as her Intergovernmental Affairs Director during transition.

Tiffany Sostrin will serve as Deputy Director of Legislative Counsel and Government Affairs. She most recently worked as chief legislative liaison for the Department of Finance.

Alison Arwady will serve as Acting Commissioner of the Chicago Department of Public Health effective June 18 as the city conducts a search for outgoing Commissioner Dr. Julie Morita's replacement.

Thomas R. Carney will serve as Acting Commissioner of the Chicago Department of Transportation as the city looks for a replacement for former Commissioner Rebekah Scheinfeld.

The mayor will as the Chicago Public Library Board of Directors to confirm Andrea Telli, current Deputy Commissioner for Public Services, to serve as permanent commissioner in June.

Eleanor Gorski will serve as Acting Commissioner for the Department of Planning and Development as the city conducts a search for a permanent replacement for outgoing Commissioner David Reifman.

The mayor announced the following department heads will remain their current roles: 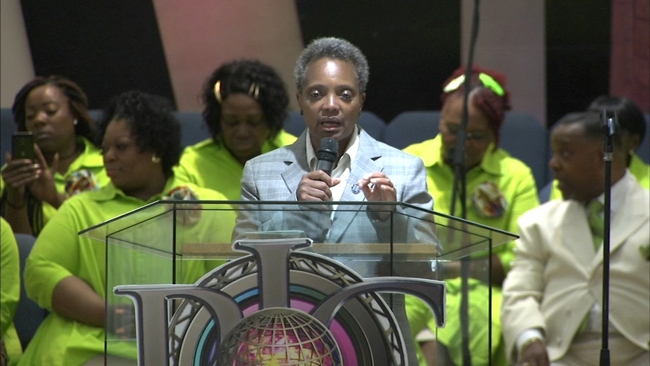