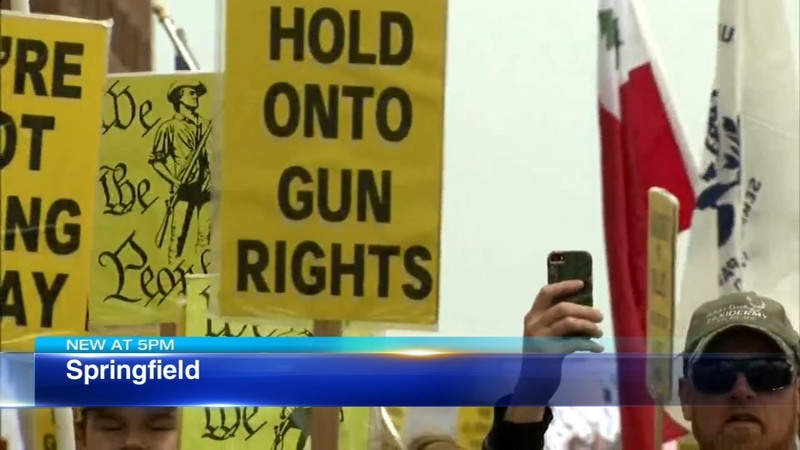 SPRINGFIELD, Ill. (WLS) -- Gun owners declared victory on Wednesday after Senate Democrats decided there was not enough support to override Gov. Bruce Rauner's veto of a bill that would have required gun dealers to be licensed by the state.

Wednesday was the last day the Senate could vote on the override.

Coincidentally, is was the same day as the Illinois State Rifle Association's previously scheduled lobby day in Springfield. That event brought an estimated 2,000 Second Amendment supporters to Springfield for a series of rallies.

Before a final outcome on the veto override, gun owners and several state legislators gathered for a rally on the steps of the Lincoln Statue.

"Thank you for your support on a day like today where we know what's being bantered about in there," said state Sen. Jason Barickman, R-Bloomington.
"You need to stay strong so we can stay strong and continue to represent you," said State Rep. Margo McDermod, R- Frankfort.

"The greatest threat to your freedoms is in the pen of a legislator in that building right back there," said Kash Jackson, a 20-year Navy veteran whose comments drew cheers from the crowd.
Democrats in the Senate thought they might have the supermajority needed to override, but the bill's sponsor was concerned about calling a vote because it seemed unlikely there would be the votes needed in the House.

"If we aren't able to override the governors unwise veto, I'm not giving up, I'll start the process all over again and I'm confident that the momentum we've built will be transferable to that effort if that's the direction we go," said bill sponsor state Sen. Don Harmon, D-Oak Park.

In a statement, Harmon said he had the votes in the Senate, but "could not assure my colleagues that the House would vote against the governor, particularly given his vociferous and unreasonable opposition to this measure."

His statement continued, in part: "In the past few days, I have had productive conversations with suburban Republican members, in particular Senator Chris Nybo, that make me believe we can create a new path to regulating gun dealers in Illinois. I have also recently received overtures and encouragement from unexpected and unconventional allies who can better inform our decision making as we move forward towards a successful resolution. While making this decision, I frequently reminded myself that 'victory' is not overriding Gov. Rauner's veto or winning any other political battle in the Capitol. Victory means protecting the people we represent from the senseless violence fueled by the ready availability of guns in our communities. Today, I am reintroducing the substance of the Gun Dealer Licensing Act as an amendment to an existing bill, Senate Bill 337, and I will begin work immediately on gathering support for the measure."

The bill would require small gun dealers to pay $1000 to get licensed every five years, require training for employees and videotaping.

"All any father or mother really wants to know is that their family is safe. We need to focus on illegal gun trafficking, school safety, how to best keep guns out of the hands of criminals and the mentally ill. These are bipartisan issues that we are working on collaboratively in our Public Safety Working Group to drive real solutions. We will keep working to keep our families safe," Gov. Rauner said in a statement Wednesday evening.

Opponents called it burdensome and unfair to law-abiding citizens.

"The dealer licensing bill does nothing to stop the crime in the city of Chicago or anywhere else in the state of Illinois because criminals are going to continue to do what they do best, and that's commit crimes," said Rhonda Ezell a Chicago gun rights advocate.

After rallying outside gun rights advocates marched inside to talk to their legislators to make sure they knew they would be held accountable in November for their actions today.

After looking at the political landscape, Senate Democrats decided they would not be calling the bill for a vote, meaning it was dead. But a new bill could still be drawn up to tackle this issue later this session. The governor has said he wants to handle gun legislation in a comprehensive way.
Report a correction or typo
Related topics:
politicsillinoisspringfieldbruce raunergun safetygun lawsguns
Copyright © 2021 WLS-TV. All Rights Reserved.
RELATED