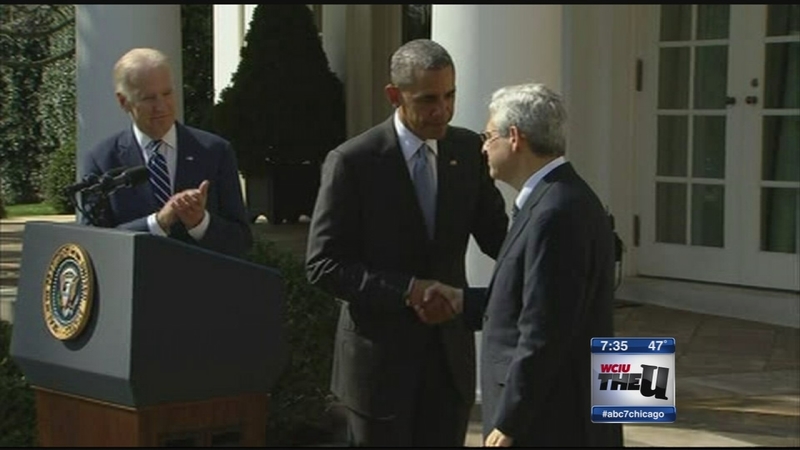 CHICAGO (WLS) -- President Barack Obama will visit the University of Chicago Law School Thursday to push his nominee for the U.S. Supreme Court.

The president will take the controversy surrounding his Supreme Court nominee Merrick Garland to the South Side as his principal ally in Washington gave Garland a proper sendoff Wednesday morning. Judge Garland was on Capitol Hill meeting with several senators to discuss his nomination.

The Democratic Party campaign to get Judge Garland's nomination a full hearing resumed Wednesday morning in the office of Illinois Senator Dick Durbin.

"I think Merrick Garland deserves an opportunity to take the oath, sit in the chair and to answer the questions," Durbin said.

Judge Garland, a suburban Lincolnwood native, is the moderate jurist nominated last month to fill the vacancy caused by the death of conservative Justice Antonin Scalia. Senate Majority Leader Mitch McConnell says his Republican caucus will not convene confirmation hearings until after the presidential election and Obama is out of office.

The president will appear Thursday at the University of Chicago, where Obama once taught constitutional law. He will praise his nominee and defend the nomination process as written by the nation's founders.

"In November, Americans will be reminded that Republicans are thwarting the Constitutional process," Simpson said. "It's a disaster for anyone running for re-election on the Republican side to have this issue out there."

Last week, Illinois' junior Senator Mark Kirk, who is up for re-election in November, was the first Republican to break ranks and urge a hearing for Garland.

"To deny him the opportunity to even be heard, an opportunity to defend himself if there are any charges. That is fundamentally unfair," Durbin said.

If Senate Republicans relent and allow Garland a hearing, he would need 60 votes to ensure his confirmation against a filibuster. The Republicans hold a 54-vote majority in the chamber.