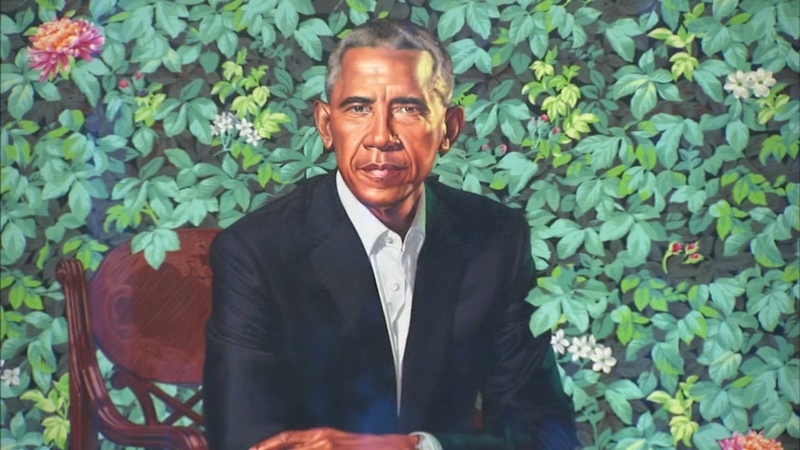 The official portraits of former President Barack Obama and former first lady Michelle Obama are kicking off their national tour in Chicago.

The Smithsonian National Portrait Gallery sent their official portraits on a cross-country tour. Their first stop is the Art Institute of Chicago, where Barack and Michelle went on their first date.

"This is a Chicago story," Art Institute director James Rondeau said as he showed off some of the exhibition putting the Windy City front and center. "Chicago has defined in some ways the Obamas. The Obamas have in some ways defined Chicago."

"This map really, again, sort of centers the South and Southwest sides as the center of the story rather than, you know, coming out as a set of satellites from the downtown perspective," Rondeau said. "A subtle shift, but an important one because the story begins there."

And there's another first: the portraits are on display side-by-side for the first time since their unveiling in 2018.

"All that iconicity around power and celebrity is there, but also they're incredibly accessible," Rondeau said.

Odds are you'll need to get in line for a close-up look at the Obama portraits. But even if you don't want to wait, you can still catch a glimpse. Looking through the windows of the Art Institute's main halls may satisfy some, but others will surely want to get much closer.

After their stay in Chicago, the Obama Portraits will make stops in New York, Los Angeles, Atlanta and Houston-and if the Smithsonian National Portrait Gallery's experience is any indication, expect big crowds.

In the year after their 2018 debut, the portraits brought in around a million more visitors than had visited the gallery the year before, according to the Smithsonian.

"We have never seen such crowds come to visit presidential and first lady portraits in our galleries. We had lines wrapped around the building," said Dorothy Moss, curator of painting and sculpture for the Smithsonian National Portrait Gallery.

The exhibition opens to the public Friday. Illinois residents can get in to the museum for free for the first week, and everyone can see the displays without paying an extra fee.

You can experience the Obama portraits for yourself at the Art Institute through August 15.