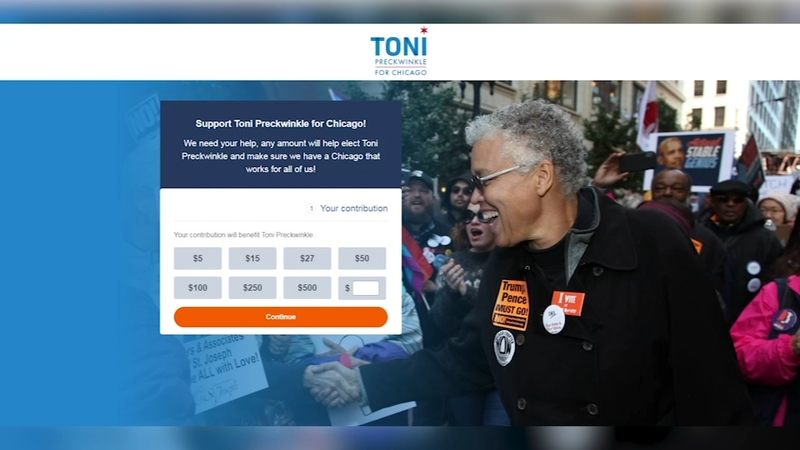 CHICAGO (WLS) -- There's a new controversy in the race for Chicago Mayor. It stems from a fundraising email sent by Toni Preckwinkle's campaign.

In it, she highlighted the case of a sex trafficking victim Cyntoia Brown, from Tennessee, and said there is a chance to help her avoid a life sentence in prison.

Recipients were provided a link where they can donate money, but the link takes them to Preckwinkle's campaign for mayor.

An advocate for victims criminalized by sex trafficking said Preckwinkle's email would not be so bad if it actually helped Brown, but it didn't.

"The fact that she was using Cyntioa Brown's case for political leverage to fundraise for her own campaign without actually providing any kind of information as to how to support Brown or how to support any other criminalized survivors in the state of Illinois was problematic to us," said Claudia Garcia-Rojas, Love and Protect.

Preckwinkle's team blamed the fundraising email on a consultant, claiming it was sent out without first being run by the campaign. Friday the candidate was apologetic.

"We deeply regret the content of the email, it was careless and doesn't reflect my values or the work that we've done on criminal justice reform," Preckwinkle said.

But Preckwinkle would not say if she would fire the consultant or return the money. Just last week she came under fire over the nearly $13,000 she raised in January through Alderman Ed Burke, whose offices were twice raided by the FBI in the past three weeks.

"In the case of Alderman Burke we donated money to women's organizations in the Latinx community. We'll look at this issue," Preckwinkle said.

"No, you don't explore your options, do the right thing. Do it on the front end so you don't have to apologize, but when you get caught again, doing the wrong thing, you know what the right course should be," said Lori Lightfoot, candidate for mayor.

Lightfoot also took Preckwinkle to task for continuing on with her petition challenge, at the Chicago Board of Elections, trying to get Lightfoot kicked off the ballot.

Friday a hearing officer told Preckwinkle's lawyer the record examination was trending in Lightfoot's favor, suggesting he call it quits. But the attorney declined, and Preckwinkle herself said they will evaluate things in the days ahead.
Report a correction or typo
Related topics:
politicschicagolooppolitical scandalelection
Copyright © 2021 WLS-TV. All Rights Reserved.
More Videos
From CNN Newsource affiliates
TOP STORIES