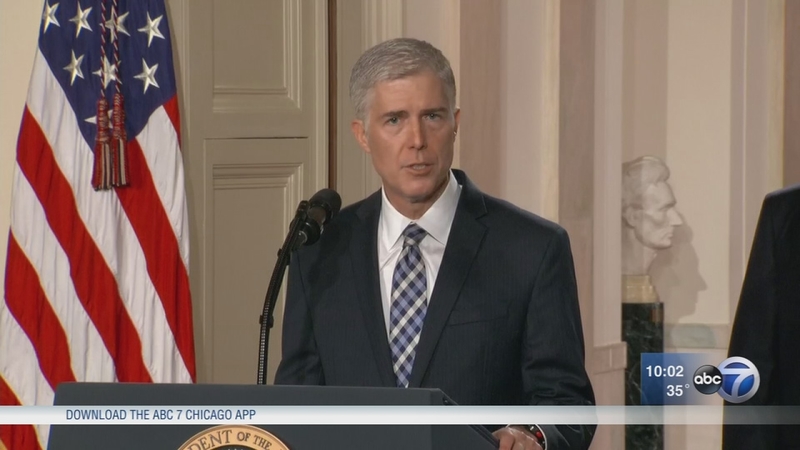 WASHINGTON -- President Donald Trump nominated Neil Gorsuch, a fast-rising conservative judge with a writer's flair, to the Supreme Court on Tuesday, setting up a fierce fight with Democrats over a jurist who could shape America's legal landscape for decades to come.

At 49, Gorsuch is the youngest Supreme Court nominee in a quarter-century. He's known on the Denver-based 10th Circuit Court of Appeals for clear, colloquial writing, advocacy for court review of government regulations, defense of religious freedom and skepticism toward law enforcement.

Gorsuch's nomination was cheered by conservatives wary of Trump's own fluid ideology. If confirmed by the Senate, he will fill the seat left vacant by the death last year of Antonin Scalia, long the right's most powerful voice on the high court.

With Scalia's wife, Maureen, sitting in the audience, Trump took care to praise the late justice. Gorsuch followed, calling Scalia a "lion of the law."

Gorsuch thanked Trump for entrusting him with "a most solemn assignment." And he said, "Standing here in a house of history, I'm acutely aware of my own imperfections and pledge that if I am confirmed, I will do all my powers permit to be a faithful servant of the Constitution of laws of this great country."

Some Democrats, still smarting over Trump's unexpected victory in the presidential election, have vowed to mount a vigorous challenge to nearly any nominee to what they view as the court's "stolen seat." President Barack Obama nominated U.S. Circuit Court Judge Merrick Garland for the vacancy after Scalia's death, but Senate Republicans refused to consider the pick, saying the seat should be filled only after the November election.

Trump's choice of Gorsuch marks perhaps the most significant decision of his young presidency, one with ramifications that could last long after he leaves office. After an uneven start to his presidency, including the chaotic rollout last week of a controversial refugee and immigration ban, Trump's selection of Gorsuch appeared to proceed with little drama.

For some Republicans, the prospect of filling one or more Supreme Court seats over the next four years has helped ease their concerns about Trump's experience and temperament. Three justices are in their late 70s and early 80s, and a retirement would offer Trump the opportunity to cement conservative dominance of the court for many years.

If confirmed, Gorsuch will restore the court to the conservative tilt it held with Scalia on the bench. But he is not expected to call into question high-profile rulings on abortion, gay marriage and other issues in which the court has been divided 5-4 in recent years.

"Today, President Trump nominated Neil Gorsuch for the Supreme Court for a position that should not still be vacant and in an appointment that should not be this President's to make. ... We cannot afford a Supreme Court justice with views out of step with the American people. I know my Democratic colleagues in the Senate will vigorously examine Gorsuch's views and qualifications for this position. Our nation will be counting on their judgement," said Rep. Brad Schneider (IL-10).

"I believe the independence of our judicial system, and especially the Supreme Court, is more critical now than at any time in recent history. That is the context in which I will review this nomination. I will meet with Judge Gorsuch and support a hearing and a vote for him-both of which were denied to an eminently qualified nominee presented by President Obama," said Illinois Senator Dick Durbin.

"Tonight, President Donald Trump nominated Neil Gorsuch to a stolen Supreme Court seat. Senate Republicans demonstrated an unprecedented disdain for President Obama and our Constitution by denying Judge Merrick Garland even a hearing. Now, they are seeking to move a controversial nominee with extreme views that would erode the rights of Americans," said Rep. Jan Schakowksy (IL-9).

"While I will reserve judgment on Judge Gorsuch's nomination until his confirmation hearing in order to give my decision the diligence it deserves, I am troubled by his judicial record of undermining the Federal Government's ability to protect labor and environmental rights, his hostility towards a woman's right to make her own reproductive choices, and by one of his previous rulings that refused to hold law enforcement accountable for excessive force that led to a young man's death. I am also concerned by several of Judge Gorsuch's rulings that would deny students with disabilities the right to a quality public education," said Illinois Senator Tammy Duckworth.

Republicans are adamant that Trump's pick will not be blocked. Supreme Court nominees must get 60 votes in the Senate to be confirmed. Democrats currently hold 48 seats and can filibuster the nomination if they hold the line.

"The Democrats will not succeed in filibustering Judge Gorsuch. They can try, but they will not succeed. The Senate will confirm a constitutionalist who will succeed Justice Scalia," said Texas Senator Ted Cruz shortly after the announcement.

The judge also has written opinions that question 30 years of Supreme Court rulings that allow federal agencies to interpret laws and regulations. Gorsuch has said that federal bureaucrats have been allowed to accumulate too much power at the expense of Congress and the courts.
Like Scalia, Gorsuch identifies himself as a judge who tries to decide cases by interpreting the Constitution and laws as they were understood when written. He also has raised questions about criminal laws in a way that resembles Scalia's approach to criminal law.

University of Michigan law professor Richard Primus said Gorsuch "may be the closest thing the new generation of conservative judges has to Antonin Scalia."

Gorsuch, like the other eight justices on the court, has an Ivy League law degree. The Colorado native earned his bachelor's degree from Columbia University in three years, then a law degree from Harvard. He clerked for Supreme Court Justices Byron White, a fellow Coloradan, and Anthony Kennedy before earning a philosophy degree at Oxford University and working for a prominent Washington, D.C., law firm.

He served for two years in George W. Bush's Department of Justice before the president nominated him to the appeals court. His mother was Anne Gorsuch, who was head of the Environmental Protection Agency in the Reagan administration.

"He very much appears to be in the mold of Scalia. You never know how somebody will end up. Justice Souter surprised everybody after he was on the bench for a number of years," said ABC7 Legal Analyst Gil Soffer.

Gorsuch is expected to face intense scrutiny from Democrats. Some liberals have demanded that Democrats block any Trump choice, underscoring the deep partisan discord surging through Washington.

"Now is not the time for business as usual," MoveOn.org's Ilya Sheyman said in a statement.

"He's a qualified judge. I don't think people are going to argue with that. It's going to be a political issue," Soffer said.

Gorsuch was among the 21 possible choices for the court Trump released during the campaign. Other finalists also came from that list, including Thomas Hardiman, who serves alongside Trump's sister on the Philadelphia-based 3rd U.S. Circuit Court of Appeals, and William Pryor, a federal appeals court judge and Alabama's attorney general from 1997 to 2004.

If Democrats decide to filibuster Gorsuch's nomination, his fate could rest in the hands of Senate Majority Leader Mitch McConnell. Trump has encouraged McConnell to change the rules of the Senate and make it impossible to filibuster a Supreme Court nominee - a change known in the Senate as the "nuclear option."

A conservative group already has announced plans to begin airing $2 million worth of ads in support of the nominee in Indiana, Missouri, Montana and North Dakota, four states that Trump won and in which Democrats will be defending their Senate seats in 2018.