President Trump withdraws US from landmark nuclear accord with Iran 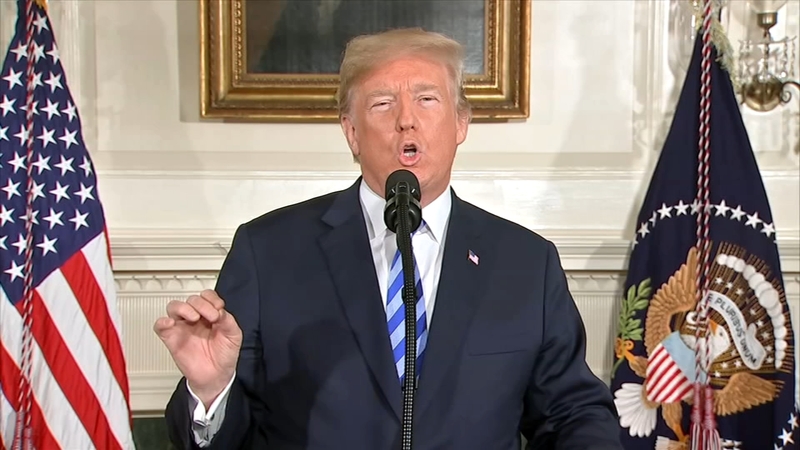 President Trump to withdraw US from landmark nuclear accord with Iran

WASHINGTON -- President Donald Trump withdrew the U.S. from the landmark nuclear accord with Iran on Tuesday, abruptly restoring harsh sanctions in the most consequential foreign policy action of his presidency. He declared he was making the world safer, but he also deepened his isolation on the world stage and revived doubts about American credibility.

The 2015 agreement, which was negotiated by the Obama administration and included Germany, France and Britain, had lifted most U.S. and international economic sanctions against Iran. In exchange, Iran agreed to restrictions on its nuclear program, making it impossible to produce a bomb and establishing rigorous inspections.

But Trump, a severe critic of the deal dating back to his presidential campaign, said in a televised address from the White House that it was "defective at its core."

U.S. allies in Europe had tried to keep him in and lamented his move to abandon it. Iran's leader ominously warned his country might "start enriching uranium more than before."

The sanctions seek to punish Iran for its nuclear program by limiting its ability to sell oil or do business overseas, affecting a wide range of Iranian economic sectors and individuals.

Major companies in the U.S. and Europe could be hurt, too. Treasury Secretary Steven Mnuchin said that licenses held by Boeing and its European competitor Airbus to sell billions of dollars in commercial jetliners to Iran will be revoked. Certain exemptions are to be negotiated, but Mnuchin refused to discuss what products might qualify.

He said the sanctions will sharply curtail sales of oil by Iran, which is currently the world's fifth largest oil producer. Mnuchin said he didn't expect oil prices to rise sharply, forecasting that other producers will step up production.

Iran's government must now decide whether to follow the U.S. and withdraw or try to salvage what's left with the Europeans. Iranian President Hassan Rouhani said he was sending his foreign minister to the remaining countries but warned there was only a short time to negotiate with them.

Laying out his case, Trump contended, "If we do nothing, we know exactly what will happen. In just a short period of time, the world's leading state sponsor of terror will be on the cusp of acquiring the world's most dangerous weapons."

The administration said it would re-impose sanctions on Iran immediately but allow grace periods for businesses to wind down activity. Companies and banks doing business with Iran will have to scramble to extricate themselves or run afoul of the U.S. government.

Meanwhile, for nations contemplating striking their own sensitive deals with Trump, such as North Korea, the withdrawal will increase suspicions that they cannot expect lasting U.S. fidelity to international agreements it signs.

Former President Barack Obama, whose administration negotiated the deal, called Trump's action "misguided" and said, "The consistent flouting of agreements that our country is a party to risks eroding America's credibility and puts us at odds with the world's major powers."

Yet nations like Israel and Saudi Arabia that loathed the deal saw the action as a sign the United States is returning to a more skeptical, less trusting approach to dealing with adversaries.

Trump, who repeatedly criticized the accord during his presidential campaign, said Tuesday that documents recently released by Netanyahu showed Iran had attempted to develop a nuclear bomb in the previous decade, especially before 2003. Although Trump gave no explicit evidence that Iran violated the deal, he said Iran had clearly lied in the past and could not be trusted.

There was a predictably mixed reaction from Congress. Senate Majority Leader Mitch McConnell, a Kentucky Republican, said the Iran deal "was flawed from the beginning," and he looked forward to working with Trump on next steps. House Minority Leader Nancy Pelosi, a California Democrat, slammed Trump in a statement, saying this "rash decision isolates America, not Iran."

In a burst of last-minute diplomacy, punctuated by a visit by Britain's top diplomat, the deal's European members had given ground on many of Trump's demands for reworking the accord, according to officials, diplomats and others briefed on the negotiations. Yet the Europeans realized he was unpersuaded.

In Iran, many are deeply concerned about how Trump's decision could affect the already struggling economy. In Tehran, Rouhani sought to calm nerves, smiling as he appeared at a petroleum expo. He didn't name Trump directly, but emphasized that Iran continued to seek "engagement with the world."

The first 15 months of Trump's presidency have been filled with many "last chances" for the Iran deal in which he's punted the decision for another few months, and then another. As he left his announcement Tuesday, he predicted that Iranians would someday "want to make a new and lasting deal" and that "when they do, I am ready, willing and able."

Even Trump's secretary of state and the U.N. agency that monitors nuclear compliance agree that Iran, so far, has lived up to its side of the deal. But the deal's critics, such as Israel, the Gulf Arab states and many Republicans, say it's a giveaway to Tehran that ultimately would pave the way to a nuclear-armed Iran.

For the Europeans, Trump's withdrawal constitutes dispiriting proof that trying to appease him is futile.

Although the U.S. and Europeans made progress on ballistic missiles and inspections, there were disagreements over extending the life of the deal and how to trigger additional penalties if Iran were found in violation, U.S. officials and European diplomats have said.

In withdrawing the U.S. from the Iran nuclear deal, President Donald Trump outlined a rationale that contradicted the analyses of U.S. and foreign intelligence sources. A look at his remarks Tuesday, announcing that the U.S. was getting out of the deal and re-imposing sanctions that had been lifted in return for curbs on Iran's nuclear program:

THE FACTS: This is unsupported by intelligence and other analyses. Iran was thought to be only months away from a bomb when the deal came into effect. But during the 15-year life of most provisions of the accord, Iran's capabilities are limited to a level where it cannot produce a bomb.

Already the deal has set its program back. Experts believe if Iran were to leave now, it would need at least a year to build a bomb.

Trump's comments suggest that Iran is cheating on the deal. But in the time since the nuclear deal, the International Atomic Energy Agency has repeatedly confirmed Iran was complying with the terms. That finding is also shared in the main by U.S. and Israeli intelligence officials, though the Trump administration argues Iran exceeded limits on heavy water production.

After the 15 years are up, Iran could have an array of advanced centrifuges ready to work, the limits on its stockpile would be gone and, in theory, it could then throw itself wholeheartedly into producing highly enriched uranium. But nothing in the deal prevents the West from trying to rein Iran in again with sanctions. The deal includes a pledge by Iran never to seek a nuclear weapon.

TRUMP: "This disastrous deal gave this regime - and it's a regime of great terror - many billions of dollars, some of it in actual cash. A great embarrassment to me as a citizen, and to all citizens of the United States."

THE FACTS: It's not true that world powers paid billions to Iran. The deal allowed Iran to regain access to its own money, which had been frozen abroad as part of the sanctions that were lifted. As for Iran specifically getting some cash, that refers to a debt the U.S. had with Iran dating to the rupture in relations in the 1970s. Iran, under the shah, had paid the U.S. some $400 million for military equipment that was never delivered because the Islamic revolution cut off ties.

That transaction was one of many complex claims that took decades to sort out in tribunals and arbitration. For its part, Iran paid settlements of more than $2.5 billion to U.S. citizens and businesses left short when relations ruptured.

TRUMP, referring to allies: "We are unified in our understanding of the threat, and in our conviction that Iran must never acquire a nuclear weapon. "

THE FACTS: Such unity is conspicuously lacking. Most allies are not in agreement with the U.S. on the threat posed by Iran. They believed the deal was sufficient to constrain the threat; Trump doesn't. Britain, France, Germany and others appealed to the U.S. administration not to withdraw. Among top U.S. allies, Israel agrees the deal fell short; others don't.

TRUMP: "We will not allow American cities to be threatened with destruction, and we will not allow a regime that chants 'death to America' to gain access to the most deadly weapons on Earth."

THE FACTS: Iranian missiles are not capable of reaching U.S. cities. Both technical limitations and orders from Iran's supreme leader have restricted the range of ballistic missiles manufactured in the country to 2,000 kilometers (1,240 miles). That puts them in targeting range of the entire Middle East, including Israel and U.S. bases in the region, but nowhere near the continental United States.

TRUMP: "Making matters worse, the deal's inspection provisions lack adequate mechanisms to prevent, detect and punish cheating. And don't even have the unqualified right to inspect many important locations, including military facilities."

THE FACTS: The deal gave inspectors wide latitude to do their work in Iran but not unfettered access everywhere.

The International Atomic Energy Agency can inspect any declared nuclear site at any time. It also can request access to any other site deemed suspicious. Iran has 24 days to allow such an inspection. If Iran refuses, an arbitration panel weighs the request. Inspectors have placed some 2,000 tamper-proof seals on nuclear material and equipment, and installed a network of surveillance cameras at nuclear sites.

The agency says its staff is spending twice as many days in Iran than it did in 2013.
Report a correction or typo
Related topics:
politicsdonald trumpnuclear weaponsu.s. & worldiran
Copyright © 2021 by The Associated Press. All Rights Reserved.
More Videos
From CNN Newsource affiliates
TOP STORIES