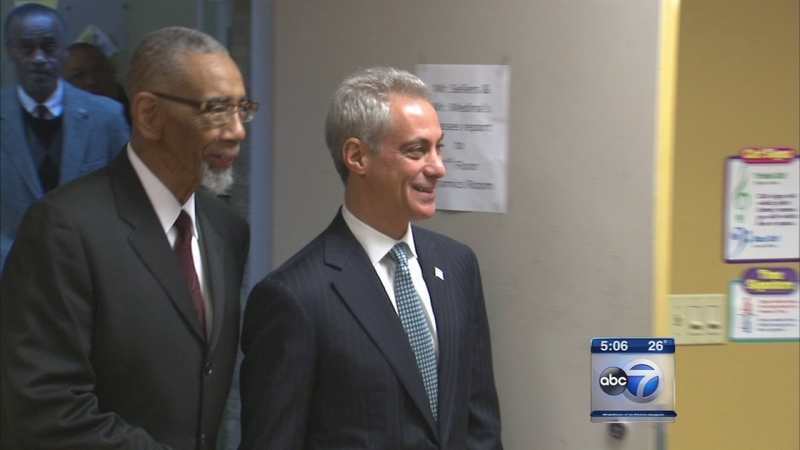 Emanuel gets unlikely endorsement for re-election

CHICAGO (WLS) -- There was an unlikely endorsement Monday in the race for mayor. Congressman Bobby Rush announced that he's backing Rahm Emanuel.

Emanuel's re-election campaign is on a roll after he was endorsed by both Chicago daily newspapers and U.S. Senator Dick Durbin over the weekend.

On Monday, he got the nod from Bobby Rush, who only a few months ago said was looking for an "alternative" candidate.

"I stand here today to offer my firm support and endorsement of Rahm Emanuel as mayor of the city of Chicago," said U.S. Rep. Bobby Rush, D-Chicago & south suburbs.

The handpicked audience applauded as the congressman said he was no longer "undecided" about his choice for mayor.

"I'm honored to most importantly to have the support of an undecided voter, as we would say, one voter at a time," Emanuel said.

"Rahm Emanuel needs to have a challenge," Rush said in July 2014.

Last summer, Rush was one of Emanuel's most outspoken critics. He told ABC7 that South and West Side economic problems worsened after the mayor closed 50 public schools.

"I'm looking for someone who represents hope," Rush said in July 2014.

But six months later, Bobby and Rahm are pals again. The congressman said the school closures are outweighed by the mayor's overall record, including the on-time, on-budget Red Line project.

"People from the South Side from the 1st District helped to build it," Rush said.

The mayor acknowledged he and Rush still disagree on school closings.

"Our differences do not measure compared to our commonality," Emanuel said.

Elsewhere, businessman Willie Wilson greeted riders at a South Side "L" stop before heading downtown to cast his ballot on the first day of early voting.

"There is no same-day voter registration so you cannot register to vote on Election Day, meaning February 24," said Langdon Neal, Chicago Board of Elections.

Candidates Jesus "Chuy" Garcia and Bob Fioretti did not have public schedules on Monday.

Also, neither of those two challengers have aired any television to counter the mayor's campaign, which has aired a barrage of ads since late last year.