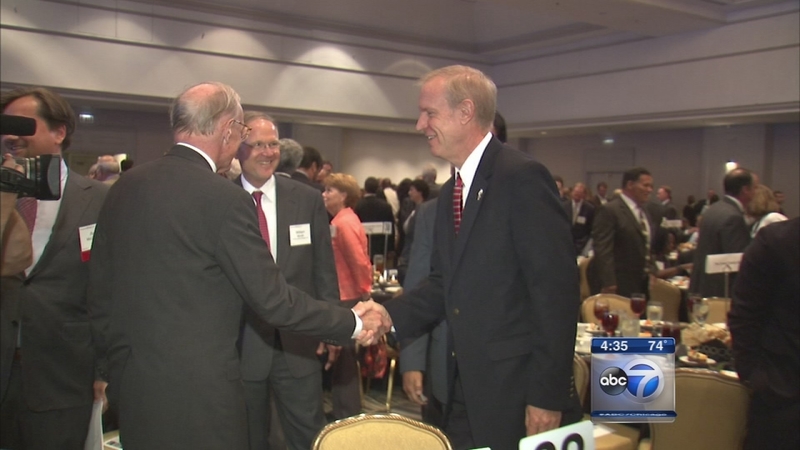 CHICAGO (WLS) -- Candidates for governor returned to Chicago to discuss how their strategy would impact the Chicago metro area.

The forum's first-up was Republican Bruce Rauner who told the audience of business and civic leaders he would lead an effort to reform the state's tax system: freezing property taxes, lowering the income tax and imposing sales taxes on more services.

"We shouldn't tax investment and income. We should tax consumption," Rauner said.

The governor, a self-styled working man's candidate, arrived at the forum a few hours after his campaign released a new television ad claiming that Rauner opposes raising the minimum wage.

"I wouldn't support raising Illinois' minimum wage without pro-business reforms. I would not support that," Rauner said.

"There's only one candidate for governor who supports raising the minimum wage without condition. It's the right thing to do," Quinn said.

During his forum appearance and at his news conference, Rauner continued his attack on what he called "cronyism" in Quinn's Democratic administration.

"It's a cost, it's a burden on the families of Illinois to have patronage, cronyism and corruption," Rauner said.

The Republican again cited the Illinois State Inspector General's report that during the former Gov. Rod Blagojevich and Quinn years, the Illinois Department Of Transportation made hundreds of patronage hires.

"My goal is to bring in people with deep expertise who truly know how to run state government," Rauner said.

The governor fired back, noting lawsuits, indictments and convictions against Rauner business associates.

"His business associates have a sorry record when it comes to integrity. I sure hope he doesn't intend to call upon any of that crowd," Quinn said.