Report: North Korea may be working on new intercontinental missiles 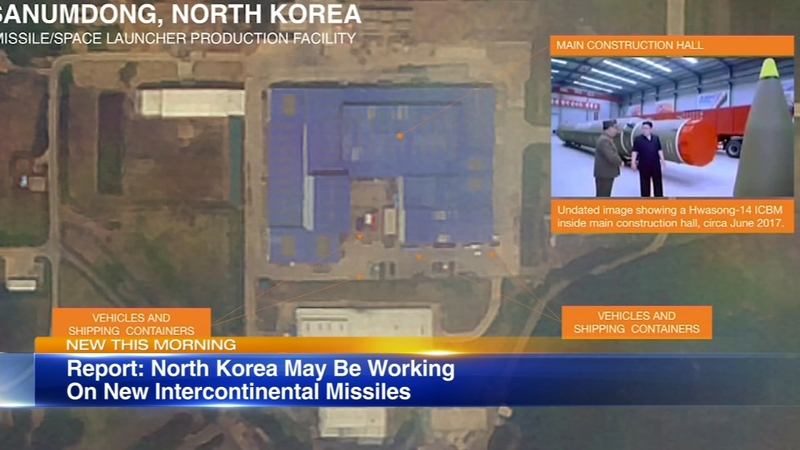 Report: North Korea may be working on new missiles

SANUMDONG, North Korea -- New indicators, including satellite images, show that North Korea could be in the midst of building new missiles, the Washington Post reported Monday, citing officials familiar with the intelligence.

According to The Post, the officials said the new information reveals that work is potentially taking place on one or two liquid-fueled intercontinental ballistic missiles in Sanumdong, a suburb of Pyongyang.

Liquid-fueled rockets are harder to store and move than solid-fuel rockets because the fuel is more volatile, according to experts. The volatility of liquid fuel can cause missiles to fail in launch and the fuel has to be stored separate from the missiles, causing a decrease in military readiness. Liquid fueling can also take a fairly long time to complete, giving US spy satellites a period of time to see launch preparations underway. Solid-fueled missiles can be very quickly launched giving the US very limited warning

The National Security Council declined to comment when reached by CNN.

News that the North Koreans are potentially developing new weapons would be a heavy blow to President Donald Trump's efforts at diplomacy with North Korean dictator Kim Jong Un.

Pyongyang has appeared open to discussions surrounding its status as a nuclear state following meetings with both South Korea and the United States. Trump traveled to Singapore in June for a summit with Kim and, following the meeting, Trump announced that North Korea no longer posed a nuclear threat -- despite a lack of evidence proving that the North Koreans would cease to continue its nuclear program.

"Just landed - a long trip, but everybody can now feel much safer than the day I took office," Trump tweeted at the time. "There is no longer a Nuclear Threat from North Korea."

"New images just today show that North Korea has begun the process of dismantling a key missile site, and we appreciate that," Trump said, an apparent reference to images of the Sohae Satellite Launching Station published Monday by the prominent monitoring group 38 North.

The images were taken between July 20 and July 22, and show North Korea has indeed started to dismantle key facilities at the satellite launch station, a move analysts said represents "an important first step towards fulfilling a commitment" made by Kim during his summit with Trump.

However, CNN also reported last week that, according to an official with close knowledge of North Korea's position on the matter, continued negotiations between the United States and North Korea hinge on Washington's willingness to make a "bold move" and agree to a peace treaty with Pyongyang.

The source previously told CNN that if a peace treaty to replace the armistice agreement that ended the Korean War did not ensure the survival of the current North Korean regime, it could be the end of denuclearization talks.

The intelligence community has publicly stated that it has seen signs of continued activity, including at fuel plants.

Pompeo also told the committee that moving toward concrete denuclearization is "a process," adding that it "will definitely take time."

"So we haven't seen a complete shutdown of production yet. We have not seen the removal of fuel rods. These types of things tell us that there are steps that still must be taken on the road to denuclearization," Brooks said.