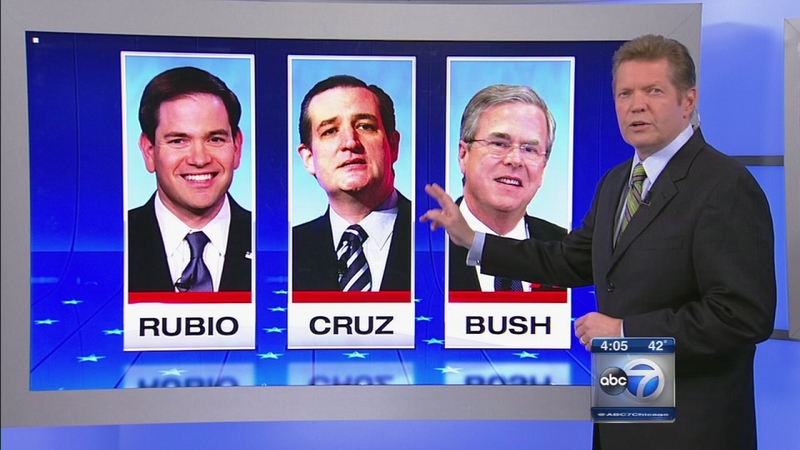 Republicans brace for the Nevada caucus Tuesday, while South Carolina Democrats vote for their presidential nominee on Saturday.

Does Bernie Sanders still see a path to victory? Sanders says "the short, three-letter answer is Y-E-S," and he'd like reporters to please stop asking him when his campaign will end.

Sanders is pledging to stay in the Democratic nomination fight with Hillary Clinton for a long, state-by-state slog.

Sanders notes that while he lost Nevada, he came away with nearly as many delegates as Clinton, saying the difference is "not so important" in the quest to 2,400 delegates needed to win the nomination.

Sanders says he hopes to win in Massachusetts on March 1, the day of the Super Tuesday contests.

Cruz tells reporters he asked for Rick Tyler's resignation. Rubio has blasted Cruz for the incident and asked whether Cruz would fire anyone involved.

Cruz says Tyler is "a good man" and deleted the tweet once he found it was false.

Cruz is telling reporters: "We are not a campaign that is going to question the faith of another candidate for president."

Rubio accepted the Cruz campaign's apology, but added: "At some point there has to be some level of accountability. Otherwise...you're sending the message to the people who work for you: Go out and do anything you want and if you get caught we'll just apologize, but we'll keep doing it."

Rubio spoke in Elko, Nevada, a day ahead of the state's GOP presidential caucuses.

Rubio's campaign on Monday announced the endorsement from Hutchinson, who was elected governor two years ago. In a statement, Hutchinson compared Rubio to former President Ronald Reagan, saying he could unite the country.

South Florida's three Cuban-American members of Congress are shifting their support for president from former candidate Jeb Bush to Rubio.

Republican Reps. Ileana Ros-Lehtinen, Mario Diaz-Balart and Carlos Curbelo said - in English and Spanish - they are backing Rubio because he could unite the GOP.

Before speaking about Rubio, Ros-Lehtinen praised Bush, saying he was "ready to be president from day one." But, echoing the other lawmakers, says Rubio can "bring new voters, new voices to our Republican Party."

Giuliani, who has yet to endorse in the presidential race, drew national acclaim for his handling of the Sept. 11 attacks.

"Rudy is a very knowledgeable friend. I consider his counsel very important," Trump said in an email to the Washington Post, which first reported the news.

The No. 2 Republican in the House said on Monday that Trump's victory in South Carolina dealt a blow to Texas Sen. Ted Cruz's strategy to win the nomination.

McCarthy said the determining contest will be Florida's GOP contest on March 15, in which the winner takes all of the state's 99 delegates.

The California congressman says, "If Rubio can't win Florida, I think it's pretty difficult" for the Florida senator to continue his campaign.

McCarthy said he could work with Trump, or anyone else who is the GOP presidential nominee.

McCarthy said Trump's momentum and success reminds him of when Arnold Schwarzenegger was elected governor in California and took office in 2011.

Interviewed on MSNBC's "Morning Joe," McCarthy said Ohio Gov. John Kasich would be an excellent president. He said that on paper, Kasich "seems like the very best."

Republican presidential candidate John Kasich says he's unscripted and will continue operating that way - even if it gets him in trouble.

At an event in Virginia Monday, Kasich raised eyebrows when he said that he first got elected to the state Senate in part by "women who left their kitchens" to campaign for him.

Democratic candidate Hillary Clinton responded by Tweeting that a "woman's place is... wherever she wants it to be."

The Ohio governor told reporters in Charlottesville later Monday that women have played a big role in his administration and campaigns.

He said because he doesn't use a teleprompter or notes, he sometimes doesn't say things as artfully as he should. Kasich said he's going to try to be "a bit more careful" but won't change his ways.

"I'm going to continue to operate on a high wire without a net," he said. "And frankly, I'd like to see everyone whose running for president get out of the scripted role and start being real and take questions."

Kasich has won the endorsement of Tom Ridge, a former director of homeland security and Pennsylvania governor.

Ridge had been supporting former Florida Gov. Jeb Bush for president since early 2015 and joined him on the campaign trail in South Carolina. Bush quit the race Saturday after a disappointing finish in the Iowa, New Hampshire and South Carolina primaries.

Kasich's campaign says Ridge is signing on as a national co-chairman.