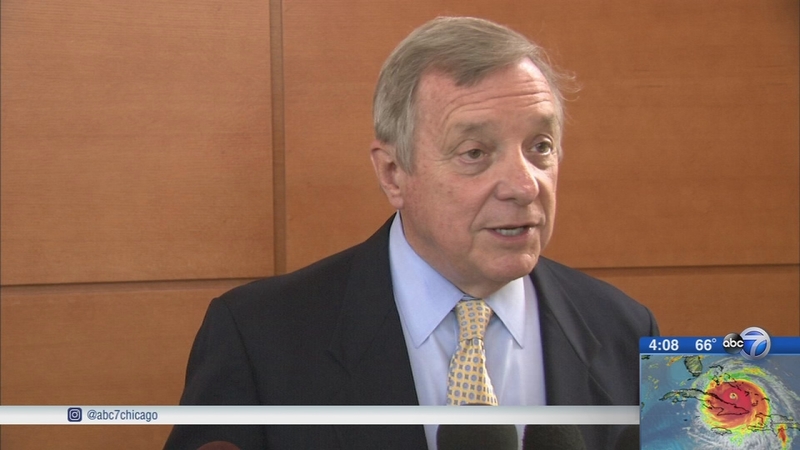 Durbin met with three of the 32 Dreamers at Loyola University Chicago Stritch School of Medicine who are set to graduate soon.

Manuel Bernal, a DACA recipient, said he came to the United States from Mexico as a 2-year-old.

"This decision could not come at a worse time for me and other fourth year medical students of DACA status at this school and across the country as we prepare to apply for residency training programs in less than one week," said Bernal.

"We now have an effort underway, a bipartisan effort in the Senate and the House to make the Dream Act the law of the land," Durbin said.

For the Loyola University Dreamers, part of their commitment is to serve in places where they are needed the most. DACA recipient Aaima Sayed was just 3 years old when she came to the United States from Pakistan. She was Durbin's guest for Trump's State of the Union Address in February.

"DACA's retraction may potentially undermine all of my efforts," said Sayed. "But the loss wouldn't only be mine and that of my fellow classmates, all of the underserved communities that we have pledged to serve have much to lose."

Durbin said he is optimistic that as Congress works to pass a comprehensive spending bill by December 8, it will also pass the Dream Act.

"What I've heard from Republicans is if you'll give us border security, we can consider supporting the Dream Act, so that's where the conversation is today," said Durbin.

Durbin said when he and other leading Democrats talked with Trump earlier this week, Trump said if Congress can pass legislation to replace DACA, he will sign it. Durbin and others are hoping for a vote on the Dream Act without it being tied to other legislation.
Report a correction or typo
Related topics:
politicsmaywoodchicagodacajeff sessionscongresspresident donald trump
Copyright © 2021 WLS-TV. All Rights Reserved.
More Videos
From CNN Newsource affiliates
TOP STORIES